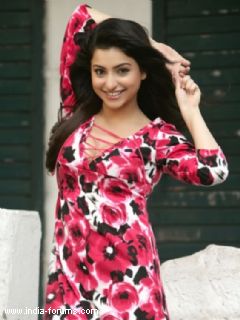 Benaf Dadachanji who was last seen in Sony TV's Byaah Hamari Bahu Ka has been out of television since long. Well the actress is all geared up for her new innings on silver screen with the film Bobby Jasoos.
"I had done a film called Halo but it was when I was a small child. With Bobby Jasoos, it's kind of my debut film as an adult and I am looking forward for its release. I had a great time shooting for this flick," says Benaf.
Elaborating on her character, she explains, "I play younger sister of Vidya Balan in the movie. My character is very gharelu type but one thing unique about her is her dream. She had always dreamed of getting married but could not as Bobby is the eldest and until she gets hitched, I can't."
She adds further, "So in the entire film, I'm worrying of how will Bobby get married being a jasoos. Nobody would like her with her different avatars and the work she's doing. I keep trying and praying that she gets married soon so I can be next in the line."
How was Benaf's experience to shoot with Vidya? "It was nice. Actually we met before during the workshop so when the shoot started, we were very comfortable with each other. I used to pull her hair and behave in such a way that I'm her real sister. Vidya is a fabulous person and very professional."
"Also it was great to work with Dia Mirza. She is very good as a producer and used to keep gifting us. Like she gave all of us one gift on the first day of the shoot and later in the middle again she gifted us. Lastly at the end of the film schedule, she again showered some gifts on us. I'm very excited and looking forward for this film. Hope audience like me in this," she avers.
Any plans to do television? "Well I'm open for TV and if I get a good role, I would definitely do it. Till then I'm happy with the work I have in hand, i.e Bobby Jasoos and few ads," concludes the actress.
Another TV actress joins the Bollywood league. We wish Benaf luck!
0 Likes

TheLastCarnival 9 years ago Such a heart-tugging gesture...May God shower his choicest blessings on you.

nandrjp 9 years ago Nice gesture Sanju Baba. Please keep on doing the good work. Your family and friends will be very happy and proud to know this.

debarshi_genx 9 years ago Such a sweet gesture.Good to hear that...

sweet_angel27 9 years ago aww that's so sweet of Sanju! Double Dhamaal will be a hit for sure!