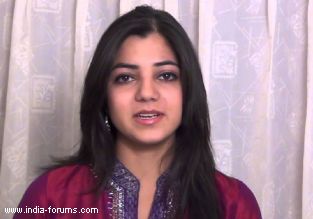 The pretty Punjabi Kudi Neha Bagga who is seen in the popular television show Bani - Ishq Da Kalma as Rajji on Colors is very focused on the message that her show is spreading to the masses.

Neha says that the concept of the show is interesting and had to be researched well before projecting it in front of the viewers, "We had done a lot of research on this issue before we started shooting for our show and it happens most in India but majorly Punjab state ranks first in it. There is a lot of craze about moving to abroad country as there is a difference in the currency and lifestyle. People believe that our child is in abroad and they are very proud of it but they are not even aware what the child is doing there in some cases."

She strongly believes that their show will definitely reach to the masses in spreading awareness on this issue, "I believe that we have succeeded a lot in spreading the awareness because the number has reduced a lot through the content of our show," replies Neha.

On being asked Neha if she personally would prefer an NRI marriage for herself or not, this is what she says, "I am not saying NRI marriages are wrong but it's important to get the complete details before getting married but I won't prefer an NRI marriage for myself because my taste is very Desi. I feel living in your own country with pride has its own charm. I would definitely love to go to abroad for trips but not for settling there."

Well Neha, we also wish that your show succeeds in spreading messages like this is future as well!

sp87 6 years ago Great answers by Neha! I'm glad she said sensible things and didn't make any generalized statements about NRI marriages. Love you Neha as Rajji! Keep rocking and hope you get lots of success

Stark_Wolf 6 years ago love u neha
watch bani only for u!

-Hima- 6 years ago Love your acting Neha! You are the only saving grace of this show! Good luck!

sindhusri 6 years ago You are doing an excellent job as rajji...All the best Neha..keep rock..

spsharmila 9 years ago looking forward to watch them together....