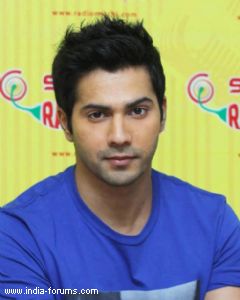 Actor Varun Dhawan who is one the hot seat of UTV Stars' show Breakfast to Dinner says he was never a fan of the perks of being a filmmaker's son and he used fake names in the past to hide his surname.

Son of filmmaker David Dhawan, Varun, who made his Bollywood debut with 'Student Of The Year', says he attended 'several acting classes' using fake names.

"I used to register myself with fake names like Rahul Khanna or something because I did not want my last name to be revealed," the 26-year-old said during the shooting of UTV Stars' show 'Breakfast To Dinner'.

The episode of 'Breakfast To Dinner' featuring Varun will air on Sunday.

HSFA 6 years ago Awww love him for his nature.
Varun Dhawan rocks

Regina.Phalange 6 years ago Now this is a tight slap for his haters ...love you varun

-Maryam.K- 6 years ago Aww he so down to earth. Love you tons Varun Dhawan

Monstuholic4evr 6 years ago Never expected him to be so down to earth!

Senoritaaa 6 years ago Love U Varun Dhawan
So humble n down to earth person U r..thats y i like you..!!

RubblesTinTin 6 years ago Aww that was so sweet of you...It shows how down to earth you were and still is...

"I feel Proud when I say that ours is the Platform of the ...
7 hours ago

The Dispute Between Gabrielle Union & 'America's Got Talent' ...
7 hours ago