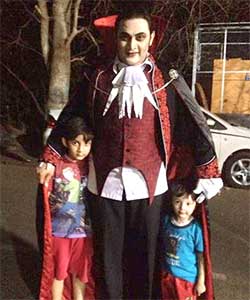 He is quite entertaining when he talks so it is surprising when he says that he has been getting offers for horror shows more these days. Out of the many that he has shot for, he is getting attention for his current on air character Daara Koyla in SAB TV's Pritam Pyaare Aur Woh. Here he talks about his role and how his kids too are his fans now.

Rajesh tells us how he gets into the get up of a vampire, "When we started the show I used to take lot of time to get ready and then there was continuity to be maintained but now I take only 3 minutes to get my hair done." We hear you use egg whites to keep your hair stiff, "Yes, my make-up guy came up with this suggestion of using egg whites on my hair to make it appear stiff and it stays that way for 24 to 30 hours. After some hours, it does become a bit powderish but if you spray water then it retains that form for long. And the best part is that egg whites do not stink so I am happy to use a natural product like egg on my hair. In fact due to this natural conditioner my hair has become softer than earlier. I use the vampire teeth only when required since otherwise I cannot speak with the vampire teeth on as my mouth stays wide open."

Surprisingly, Rajesh who has a funny personality and has done comic roles earlier is suddenly getting horror shows. Telling us about it he says, "I have been getting bhoot roles for some time now. On the upcoming Epic channel too I have already shot for 40 episodes of a sitcom where I play Yamraj. On POGO, I did Bhoot Raja aur Rony which were 2 telefilms in one year. And now this so I feel I am living more in the shamshaan (cemetery) than at home."

Rajesh who is married to Madhavi Chopra Kumar who too was an actress earlier has two sons who are eager to see their father in his role, "My sons who are 6 years and 2 year old like me in the show. While the younger one doesn't know fear at his age and enjoys watching me, the older one was scared seeing me so I took him with me for the shoot and showed him how I get transformed from my normal looks to a vampire - Daara Koyla!"

We are sure that despite his horror avatar with his comic sense, Rajesh must have kept his kids in splits even on the sets!

-Serene.Rose- 6 years ago Pritam pyare.. rocks! rajesh is doing fab job n so is the cast!

Bigg Boss 14: Teaser Promo of Nikki Tamboli is Out
17 minutes ago

Neha Mehta aka Anjali Wanted To Return To 'Taarak Mehta..' ...
51 minutes ago

Star Plus' Ghum Hai Kisi ke Pyaar Mein To Go To Nashik For ...
56 minutes ago