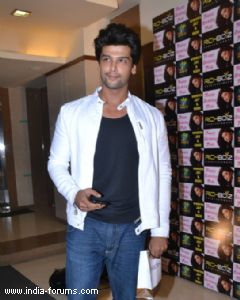 TV actor Kushal Tandon, who declared his love for model-turned-actress Gauahar Khan on the reality show 'Bigg Boss Saath 7', says he doesn't want to keep his relationship under the wraps.

"No, why should I hide about my relationship with anyone? I proposed to Gauahar on national television and I love her, so there is nothing to hide. Pyaar kiya toh darna kya!(If you love someone, why to be afraid)," Kushal told in a telephonic interview from Mumbai.

"I met a girl on a reality show and fell in love with her. Everyone saw it, so why should I lie about it or hide it," he added.

The 28-year-old is participating with his girlfriend Gauahar in action-adventure show 'Khatron Ke Khiladi Darr ka Blockbuster' and 10 other celebrities. He says it will be "fun" to do the show, which will air on Colors.

"I accepted the show because it will be fun. I will get to do so many adventurous things and I will get to spend time with Gauahar too. I am really looking forward to it," he said.

When asked about his fear, he said: "I am scared of reptiles. I don't like lizards and snakes. If I get something to do with these I will just pass it."

"I will not pass it, but I can't say now how I am going to react to it. I can do things related to water and heights, but I really have this fear of reptiles," he added.

When asked if he would concentrate on fiction shows in future, he said: "Right now, I am focusing on my Bollywood debut. I can't say much about it now, but it will be out by the end of 2014 or in 2015."

-Daredevil- 6 years ago Aaah, what relationship?
Im sorry, but its more of deal the way i see it. 'You bring me fame, ill bring you fame and lets live happily ever after.'
Ill be surprised, really surprised if these two get married anytime soon.

aleyammakroy 6 years ago ALL THE BEST OF LUCK KUSHAL TANDON.HAVE GREAT FUN ON KKK.

ghettogurl88 6 years ago Guys it is kind of true, I don't want to get into his business but it is true when you know he was on Nach Baliye with his Russian gf and now with Gauhar Khan. If it were an article about Ranbir Kapoor you don't know how many times they bring up Deepika's name in convo and here they are not even talking abt her. It's as if they don't remember her or he really did just pull it off to come on the show. So I am a bit confused here.

adoremevirgo 6 years ago cant believe how some ppl pretend to be engaged just for the sake of participating in nach baliye...disgusting...

Sparklingcider 6 years ago Eh???? WTH happened to whats her name that he was with beforehand???? Seems to be this is nothing more than a mutually beneficial showmance for both K & G!!!! >:(

Your fans will support you everywhere you go!

littlesmile 6 years ago LOve u kushal :) Haters shuld get a life ;)

all the best ha u'll surely make it

nicegirl_good 6 years ago Kushal is using gau , although gau genuinely likes him but Kushal doesn't give two hoots about her . He is using her to get work