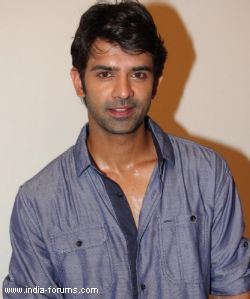 Barun Sobti the current heartthrob of Indian Television has decided to test unchartered waters and is all set to take a plunge in the world of Bollywood with his debut film 'Main Aur Mrs.Right'.

It will be a volte face for Barun Sobti who is currently seen playing the character of a ruthless and cynical businessman, Arnav Singh Raizada in 'Iss Pyaar Ko Kya Naaam doon?'. Main aur Mrs.Right is a romantic comedy that promises to strike the chord with the current generation.

We contacted Barun who confirmed the news, " Yes I am doing the movie and I am super excited to be part of the movie it's a big challenge to start a new phase of my career. I find the story and my character very promising.

The grand mahurat of Madmidaas Films' Main Aur Mrs Right' was held with much pomp and show at the Evershine Mall, Malad. Cracking the auspicious coconut and sounding the clapboard, veteran music director Bappi Lahiri launched the film in a traditional manner.

Producer Pooja Gujral commented –"Romance and comedy are the two genres that the audiences love to watch. The storyline the people will relate to -- it is not preachy but endearing. Besides a fun-filled story, the film also boasts of some good music. The songs will linger even after the film is over."

Bappi Lahiri who is composing music for the movie said-" I heard the script and I instantly said yes to the film. People usually associate me with the music of the 80s but mark my words the music that I will compose for Main Aur Mrs Right will be the never heard before kind. I am thoroughly excited to begin recording for the film. I will be composing four tracks for the film. And though unusual, it will have the Bappi Lahiri essence."

Shenaz Treasurywala who plays the female lead is excited about it and said-" I play this picky girl looking for her Mr.Right. She's a perfectionist and just won't settle for anything less.  In some ways the character is very much like me. And yes, the hunt for Mr. Perfect is still on. Does he exist? I don't have the answer yet."

The plot surely looks promising and we wish the entire team of 'Main aur Mrs.Right' all the best and hope they succeed in tickling the funny bone of the audience.
0 Likes

_Barunfan_ 6 years ago Barun Sobti..miss you lots come back soon

Urea 6 years ago Barun Sobti is the Best
proud to be a Sobtian...

youls 6 years ago you are simply the best Barun Sobti!!!!!!

era.b 6 years ago Barun Sobti eagerly waiting for ur movies

Equra 6 years ago all the best for ur movies Barun

BarunKiGEL 6 years ago Love u so mich Barun Sobti..
U rockxxx

'Billions' Renewed For Season 6
46 minutes ago