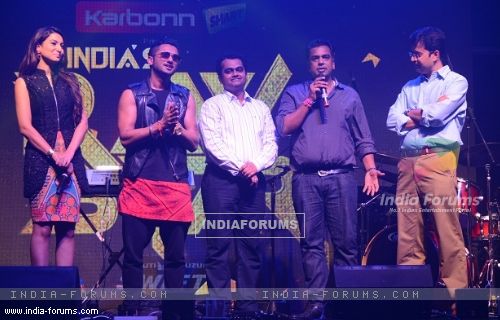 Star Plus' new reality show India's Raw Star is all set to launch and enthrall the Indian audiences. The concept and format of India's Raw Star has been designed in to get the feel of a live music concert while sitting back in the comfort of their living rooms. The show is produced by Gajendra Singh's Sai Baba Productions.

TellyBuzz got into the conversation with producer of the show.

You have been a part of many reality shows so what new concept you have brought into this show?

India's Raw Star is a show which is on the lookout for the ultimate performing artist who can create their own inimitable style of singing. One will get to see an all-round performer in the show irrespective of the language of singing or the genre of music.

How did the journey of India's Raw Star commenced?

I have been into many reality shows like Antakshiri, Sare Ga Ma Pa etc. Since 2-3 years no such musical shows was on floor, so the talks were on to bring a new show with Gaurav Bannerji, the General Manager of Star Plus and Ashish Manchanda.

The show will see Ashish Manchanda on board who will be heading the sound team. He is the only Indian sound engineer to have worked with Michael Jackson and has worked on a number of international music shows. So while the discussions were on to make a musical show, Honey Singh came into the picture. His personality is totally different than we thought of before meeting him. I can see a legendary musician in him, such a musician who is a composer as well as a singer and amongst all a great superstar. So he was the apt ambassador for the show. After getting such a responsible face for the show, India's Raw Star journey started.

Tell something about the host of the show which is meant to be an important aspect for running a show?

Yes, host is a very important factor to run a show. So for the host there were discussions going on for a few names. The names that emerged out from the discussion was of Gauahar Khan. Then we thought to meet her and as it is said sometimes only the first meeting is enough to know the person. And we got it in the first meeting itself that she is the perfect choice for the show.

Well let's hope this show of Gajendra Singh too gets success on television.