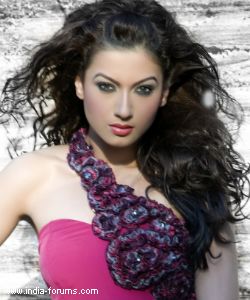 TV's gorgeous model turned actor Gauahar khan who is the winner of the reality show Bigg Boss Saath 7 on Colors has now taken a step forward to be a part of another reality show Khatron Ke Khiladi Darr ka Blockbuster.

She entered in this television world with a popular dance reality show Jhalak Dikhhla Jaa 3 on Colors and then in another reality show Khan Sisters on UTV Bindass. She has always been a part of reality shows because it's her belief that fictional shows are not her cup of tea. During her stay in the Big Boss house, her co-contestant Kushal Tandon proposed her on the national television which made her more popular amongst the viewers.

Tellybuzz spoke to Gauahar to know more about her participation in the show and talks about her filmy career.

An elated Gauahar says, "I am very competitive as a person if you have seen in Big Boss house there were tasks to be performed and here there are stunts so there is a vast difference between Bigg Boss and Khatron Ke Khiladi -darr ka blockbuster. While in this show you have to do daring stunts like standing at the edge of 20th floor building where all the strategy will fail  and this is what is the challenging part of this show. I m trying to challenge myself in different way even.  I am not at all adventurous and that's the reason I am doing this show (Laughs). People loved me for the way I am and Khatron Ke Khiladi darr ka blockbuster will help me to maintain the connectivity with my fans and what to aspect of Gauhar khan is to be projected in front of them. I would like to show them that how I would be in such tough situation, I don't know it I am little fattu when it comes to  performing stunts and so lets see how it goes."

Gauahar is content on being a part of the show as she says that the makers offered her the show because the show is good for her and vice a versa, "It is great show and it is a show which I don't want to miss. Also I am now associated with the channel Colors and as I share good relation with Kushal that is why the makers of the show thought of offering the show to us as we are good for the show and the show was good for us. We took some time to decide whether we should participate or not."

She says her never say die attitude is the strongest quality will help her stay in the show,   "Khatron Ke Khiladi -darr ka blockbuster we will get to see the potential of the other contestant on day one but I think it's really unfair to take Geeta Tondon on the show as she is already a stunt women (Laughs). I am going to remove a morcha (Laughs), no I am joking but I think more than physical strength what matters is the appearance. So let's see how that goes. My never say die attitude is the strongest quality in me which will help me in the show, I never easily give up and it is only when I realize that now I can't that time only I give up but till now it's the biggest advantage for me, I am little crazy."

"I have got so much love on television that I won't be able to return it back. I can only keep doing good work so that people keep loving me and this will be my way of returning love to them. I hope that the love I got for Jhalak Dikhla Jaa 3, Khan sisters and Bigg Boss Saath 7 continues in future too." she concludes thanking her fans for their pleasing gesture and loving her so much.

--khush-- 6 years ago GauShal rockss... all the very best to both of you

drafsul 6 years ago All da best Gauhar Khan ...I am sure u will give ur 100% to every challenge and give a very tough competition to the other contestants. ..hope u win this too

rose-girl 6 years ago Can't wait to see u Gau!! Missed u sooo much!!

-Shanzy- 6 years ago But what about her fake phobias? She will faint everyday I guess. Kushal will say no to almost all of the tasks. Jeez.

Natkat 6 years ago Ha ha kauwa could not do a simple task in Big boss now he is in kkk what a joke. Gobar can atleast feed his kutte ki paani when he feels tired and kauwa can run to gobar everytime she faints ha ha ha mummy and son back to torture us.

PROTIM21 6 years ago Wou, so many dumb gauhar haters are here.. Stupid, dumb people, for ur kind information bb7 only rocks because of Gaushal.. WAITING FOR KKK5