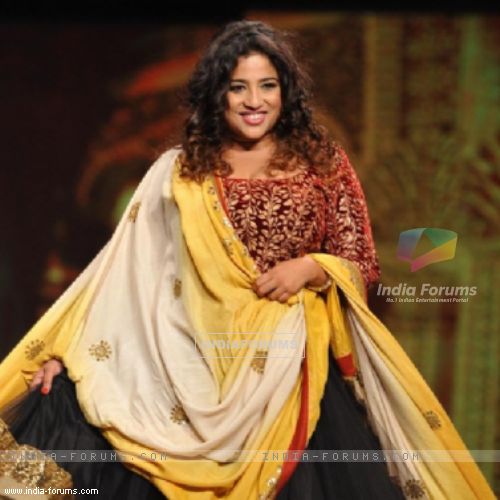 With Colors Jhalak Dikhhlaa Jaa Season 7 steaming up by each passing day, the chatter box of the show RJ Malishka gets evicted as she gets into a face off with Kiku Sharda. TellyBuzz got in touch with Malishka and this is what she had to speak about her journey journey, her experience and what else she is open to! Read on to know what Malishka had to say!

How was your journey in Jhalak Dikhhlaa Jaa Season 7 so far?

It was just faaabulous and unforgettable. I had already figured it out that I am going to be in the race when people have already established themselves. So it has to be more difficult than what it actually is. You are getting into the competition where every has figured out their strengths and have connected to the audiences in the past five weeks. They got a chance two build a rapport with the audience. But honestly, it did not bother me because if they have chosen me then there is a reason and as long as I will last i will find a reason to have fun. I think that is exactly what I succeeded in doing. Every day I had so much fun at the rehearsals that I felt the rehearsals weren't serious but they were serious too at the same time. My choreographer Diwakar and I used to have a lot of fun in the Jhalak House. I had a choreographer who used to do various lifts with and various other things like that. Every day was a journey of understanding and learning something new. It was just not about going on the stage and performing or getting those marks and asking to vote for their 'MAL'. Every week was about yourself, your body, about what you can do, what you cannot do, who you are as a person, who are you when you are thrown out of your comfort zone. Jhalak was a huge learning for me and I am very thankful that I got an opportunity like this.

You are the only person from the media who has made it to Jhalak Dikhhlaa Jaa Season 7. How does it feel?

It is amazing how conveniently I become a celebrity and media come behind me to cover me. It is like Ardhanareshwar roop for me (laughs aloud). All the time I am dabbling between two roles of a celebrity and media personnel. When I am walking out on the red carpet and media is clicking my pictures and when I am on the other end of the mike, I am media. Anyways radio is not completely media. I am not entirely media and not entirely into non-media. I am somewhere in the middle. But yes, I am glad that the doors have open up and I hope more people get to do this. My focus was always entertainment and entertainment with a purpose.

Share your experience of playing a special RJ round with Kareena Kapoor?

Yaar Kareena Kapoor is too good. People call her the queen of gossips (laughs). But Kareena Kapoor would be damn good as an interviewer as well. Kareena was like Chalo maine media se kuch toh ugalwaya! The first question she asked me was how many boyfriends do you have? I did not even know what happened and what people saw on television was just one percent of what actually had happened on the sets. It was so crazy. Manish Paul and Ranvir Shorey dragged my poor fellow on the stage and Kareena went on to announce what my surname would be post my wedding. The judges were having a rock and role time. I still remember asking Madhuri Dixit Nene to help me. I had literally turned pink. When you are on stage and you are being an entertainer, you are not necessarily being yourself. You are just being someone be it a bhai or a nautanki. But suddenly I was brought down to real life and was like OH MY GOD! It was quite an experience that Kareena Kapoor was happy. She even got me to say who is my favorite Singham and I was like Remo Dsouza would really look good without his shirt (laughing aloud). Poor Remo took off his jacket. I think Kareena would make an excellent Radio Jockey ever.

What do you have to say about the judges?

One of the reasons I always wanted to do Jhalak Dikhhlaa Jaa was Madhuri Dixit Nene. She is one of my favorite dancers. We used to dance on her songs in schools, college and even now. But for her to judge me and for one of the episodes I was in her team and I was dancing just behind her. i felt as if I will just faint. That episode is very special to me and I am glad that I got evicted after that episode. I have met Madhuri Dixit Nene earlier as well. Whenever she used to come to the studio, we always used to have mad fun with her. I remember wearing dupatta and a ghagra choli and covering my face and dancing up to her. She used to be like WHAT?!?! She has always been fond of me, always so encouraging and motivating on the show as well. It was never like you did it so badly.

Karan Johar is fabulously entertaining. He takes jokes on himself very nicely and that is how we manage to pull his leg all the time. Remo Dsouza is a little more serious because he is more technically aware. But when he was not on judges chair and come out, he would be so chilled. I am glad I could be myself and never had to be formal.frankly, I feel they are the perfect three judges for this show.

Who according to you can win this season of Jhalak?

There are high chances between Mouni Roy, Ashish Sharma and Karan Tacker because it is a journey of a non-dancer becoming a dancer. By that logic I think these three possibly stand the most chance. The rest are already fabulous dancers. Karan Tacker is very hard working. He is a non-dancer and improving by each passing week. He has entered into 30s as well. Ashish Sharma too is extremely hard working and he has a solid backing of fans. He has got a superb choreo partner too. Shampa brilliantly understands what he can and cannot. Same is with Mouni. Punit Pathak is a wonderful choreographer. She is very in it to win it'. She is working her way every week to win it.

You have done radio and now television. All ready to do films?

Arree totally! Bring it on! I like spreading joy. I like having fun. You do not want a person like me to come up there and be intense. Each one has a role to play but I believe if I am someone who can tap it right, has the right scope for me. People did not believe I can dance but I managed to. I want someone to find me a right role to do one proper intense role where I am crying, where I am really serious. I would love to show that side to the world. I used to do dramas in college and I could bring out tears with the drop of a hat. Later, everyone would be like Tu ro kyu rahi he?Kuch hua kya? I would really like to do something like that and would like to explore cinema.

TellyBuzz wishes Malishka all the good luck for all her future endeavours.

Haridas 5 years ago Ashish Sharma you are an excellent actor. I AM sure you will rock as Ramji. Looking forward to the promo of SKR..

suman77 6 years ago Ashish Sharma
i hope you succeed in everything...best luck for your future... You are a fabolous actor keep rocking

suman77 6 years ago Ashish Sharma I loved your performances in JDJ I love the way you try to do something new each time you come on stage. Keep dancing , and I hope you reach greater heights of success. All the best ...

KiranSonu1 6 years ago Malishka u r absolutely ryt abt Karan Tacker..He is so hard working &he has improved most in JDJ7...
Karan Tacker shld win.All d best & Good Luck.

nupurdas1 6 years ago Malishka u r ryt abt Karan Tacker..He is so hard working & improve so much..
Karan Tacker shld win.

nano12 6 years ago You're doing good job in RangrasiyaAnd jdj ...

Ashish Sharma best of luck for Jhalak and Rangrasiya.

Rudraparo11 6 years ago Ashish Sharma you are already a winner for me, best of luck for Jhalak and Rangrasiya.