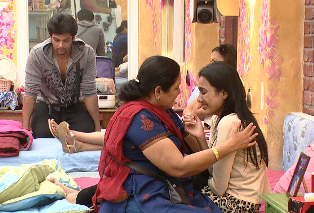 The last episode of the popular reality show Bigg Boss Saath 7 which airs on Colors, was one of the most special and emotional day of the season. The Freeze task which was given by the Bigg Boss has surely become a memorable moment for the contestants in the show as well for the audience.

The Freeze task saw the family members of the contestants in the Bigg Boss house entering the house and sharing their love amongst all contestants after meeting them for a short span of time.

One of the family member entrant in the show was Nanda a.k.a Kamya Punjabi's mother. We got in a candid chat with Nanda Punjabi to know about her visit in the Bigg Boss house and much more.

Kamya's mother Nanda was extremely happy to visit the Bigg Boss house and meet her daughter and the other contestants too, as she says, "I felt very happy when I went inside the Bigg Boss house as I got to meet my daughter and the other contestants too. All are playing very well and I wish them all the best for the show ahead. For me everybody is the winner of the show as they have come so far in the show away from their family and their daily life."

We further asked Nandaji, whether did she have any advice or suggestions to give to her daughter on the way she is playing the game in the Bigg Boss house, and she quipped, "Well truly, I have no advice or suggestions for Kamya, I feel that she is walking on the right path and so are the other contestants too. The only thing that should be in a little control is the fights that keep happening."

Aara is proud to be Kamya's daughter, "Whenever her mother cries in the show, she keeps asking me what happened to mummy, is she not well. She is very much concerned about her mother. But she has become very strong now and she now says that her mother will win the show and come home soon. Even when she goes in the garden to play and anybody asks her who are you, she proudly answers 'Mai Kamyaji Ki Beti Hoon'."

Well, that is extremely nice to hear on how much the cute little baby loves her mother, and understands the game and also wants her mother to win the show. All our good wishes too are with Kamya and other contestants in the house.

With just four weeks left for the show to come to an end, the eagerness to know about the winner of Bigg Boss Saath 7 has begun. May the deserving contestant win the reality show.

NxtRockstar.. 6 years ago Awww...that's so cute! Aara surely is one cute kid.
I want Kamya to win the show. She keeps me gelled to show. I want to see her lifting the trophy this season.

Isa_Rahman 6 years ago Kamya Punjabi is playing vamp role inside the house. Hopefully she is kicked out soon like her best friend baingan Pratyusha.

danceismyworld 6 years ago That is so sweet. Kamya's mother and Daughter both are so cute.
"Main kamya ji ki beti hu" This line was so cute.
Thanks IF for the article.
Kamya is doing great in the show.
I really hope she wins the show. She deserves it.

Lady_Bheem 6 years ago Awww.. So cute Aara.. Kamya rocks !! Hope she wins and makes her daughter more proud of her ! :)

Yuvika_15 6 years ago it was so sweet hearing abt her daughter... mus b dif for them both 2 be away 4rm each other. even tho she knew what she was getting in2, u don't realise u will miss ur family as much until ur in the BB house ...

parii2 6 years ago she seems to be such a sweet person, she brought so much positivity in the house that time.

bandschanchali 6 years ago kamya's mom is really nice unlike andy's mom who seemed very nice when she went inside the house n after coming out she talked ill of kamya.like andy like his mom.

'Naagin 5' To Welcome Two New Entries in The Form of Karan ...
47 minutes ago