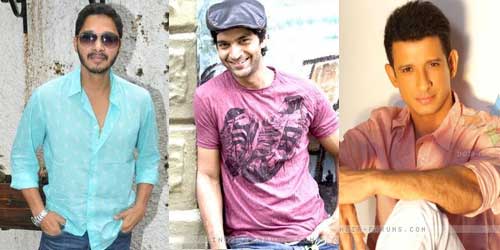 Looks like it is raining Bollywood celebrities on television these days. While this trend had started long back it gained more momentum off lately. With actors like Amitabh Bachchan, Shah Rukh Khan, Anupam Kher, Sonali Bendre, Bhagyashree Patwardhan taking up shows on the small screen, we also understand that some handsome Bollywood actors too are all set to make an appearance.
While TellyBuzz had earlier reported about DJ's Creative Unit all set to bring a new show on Star Plus based on the lines of American TV Series Everybody Loves Raymond, we now hear that Purab Kohli, Shreyas Talpade and Sharman Joshi were approached for the lead character.
When contacted Purab Kohli, he refused to comment. But our much reliable source informs us, "Purab had come to give an audition for the main lead of DJ's Creative Unit's next venture."
When asked Sharman Joshi regarding the same, he reverted, "It is not true. Nothing like this is happening."
We also tried contacting Shreyas Talpade but we could not reach through him.
Well, whoever bags the role, we hope the makers of the show strike the correct chord with the viewers.
Keep reading this space till TellyBuzz gets back to you guys with a confirmation.
Upasana Patel

6 years ago Well hope better reason prevails n they all 3 refuse the role as the show is doomed to failure as no ragna fan can ever forgive djs n wtch any srl by them, the sorry state of there two shows HitlerDidi n HumHainNa proof enuf

6 years ago Everybody loves Raymond was an incredible show. I just hope the Hindi version can do justice to it.

+ 3
6 years ago Hope Three of them uses their senses and watches THE CRAPIEST shows that DJs have given and never do their show..!!!

Please.. save urself.. refuse DJs.. you will get many more.. and much better opportunities then these PH

6 years ago Shreyas sir ...'Dor' 'Iqbal' my all time favorites...All The Best

6 years ago Can't stand this Purab Kohli. But not one of them sounds particularly exciting.

6 years ago Thought Ronit Roy and Vindoo Dara Singh were the chosen ones.