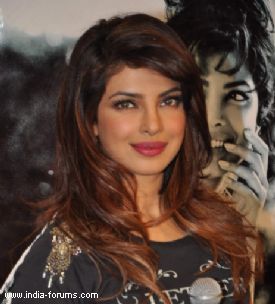 Bollywood actress Priyanka Chopra, who is also creating waves in the field of singing, will stage a livewire performance on New Year's Eve here. Energies will be on a high, says the "desi girl".

She will perform at the Park Hyatt hotel where percussionist Sivamani and DJ Dave Zobhaa will also raise the excitement level to ring in the New Year.

"The New Year is about new beginnings and I'm excited to collaborate with Park Hyatt Chennai, Sivamani and DJ Dave Zobhaa to create a perfect start to 2014! Energies will be at an all-time high as we move into 2014," Priyanka said in a statement.

"As an entertainer, my aim is to create an experience that engages, excites and inspires the audience. We collectively will make this a night to remember," she added.

In 2013, the actress did movies like "Zanjeer(2013)" and "Krrish 3". She was also part of movies like "Shootout At Wadala" and "Goliyon Ki Raasleela Ram-Leela", in which she performed on item numbers like "Babli" and "Ram chahe leela" respectively.