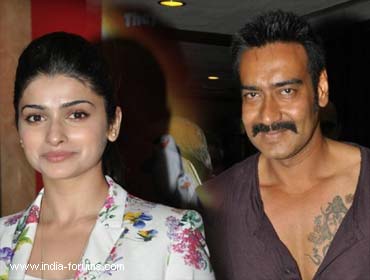 Prachi Desai says Ajay Devgn has an aura about him and she would like to be paired with the actor in a film.

"I have done two films with him (Ajay), but have not been paired with him. In my next film, I would like to be paired with him," she said in an interview.

The 25-year-old worked in Ajay starrer "Once Upon A Time In Mumbaai", in which she was paired with Emraan Hashmi, and now she features in the forthcoming comedy "Bol Bachchan", which has the actor in one of the lead roles.

"The first time I met Ajay was on the sets of 'Once Upon A Time...' When Ajay walks in, there is so much silence on the set. His aura and personality is so intimidating but at the same time, as a person, he is so calm. I think, to be around him is so wonderful. I am not scared of him, but there is this respect I have for him which makes me sober down in front of him," she added.

Director Rohit Shetty's "Bol Bachchan" is Prachi's first comedy and it took her a few days to settle down.

"For me, it was a very different set up. The kind of films which I have done are serious...As far as work is concerned, I feel Rohit Shetty is a director with a magic wand," she said.

Shooting was also a different experience for the actress.

"In comedy, you cannot get your timings wrong. Also, people who are saying the lines, are not supposed to think it's funny. They just have to say it like normal lines. You have to have a certain understanding about what tone you have to catch and change it from scene to scene," she said.

"I learned a lot from watching Abhishek and Ajay. When Abhishek had these hilarious lines, he just had to keep a straight face and say it. Ajay had to talk wrong English and he did it convincingly. It is the toughest thing to do," the actress added.

Malaika Arora shares her biggest challenges upon Testing ...
26 minutes ago