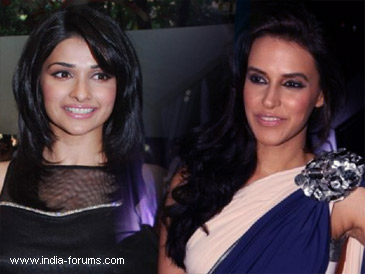 Actors Prachi Desai and Neha Dhupia feel their mothers have remained their strongest pillar of support and helped them grow professionally.

"I am very lucky to have a supportive and encouraging mother. She has always been there with me through the thick and thin. It is because of her that I have grown in my career," said Prachi, who started her acting journey with popular television serial "Kasamh Se" and then graduated to the big screen with hit film "Rock On!!".

Neha, who comes from an army background, expressed gratitude to her mother too.

"My mother has encouraged me to give my best shot in whatever I do. She has been the strongest pillar of my life. Her extreme reactions are seen only when I am unwell otherwise she is very supportive," Neha told IANS.

Prachi and Neha were here with their mothers - Amita Desai and Manpinder Dhupia, respectively - at the unveiling of Asia Mom Survey Thursday by consumer goods firm Procter&Gamble.

Both the actors plan to take an off from work and spend Mother's Day Sunday, with their mom.

"I am going to spend the entire day with my mom the way she wants to and ask my sister to come over and give her a surprise," Prachi said.

"I am here (in Delhi) to spend the weekend with her. We are planning to go shopping, watch movies and gossip together," said Neha, last seen in "Dear Friend Hitler".

Her mother, says she loved Neha's gangster avatar in "Phas Gaye Re Obama".

"Neha has improved a lot in her performances over time and every role that she played has taught her something or the other. Out of all her work, I loved her the most when she played a gangster in 'Phas Gaye...'," Manpinder told IANS.

Neha Dhupia: Your weighing scale doesn't define you, you do!

Madhrima Tulli & Ssharad Malhotra starrer “Pasta” gets an ...
a minute ago

Kareena Kapoor Khan’s 40th Birthday: Inside Pics give ...
18 minutes ago

Fire erupts at NCB office building in Mumbai; No injuries ...
29 minutes ago