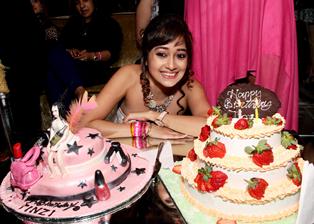 Actor Tina Dutta is a household name in India and meets all her fans in their drawing rooms every single day with her character of Ichcha first and now Meethi who have become very popular and is touted as one of the most popular personalities in TV today having won several awards for her performances.

Tina excitedly says, "I love celebrating my birthday with loved ones and friends and working together for so many hours day, i am very close to all my Uttaran co-stars. It was a great celebration with everyone after a long time and i will always remember this b'day."

7 years ago Belated happy birthday Tina Dutta .U r an amazing actress. love u loads. May u get even more success and happiness in ur life..

7 years ago Happy B Day Tina! Glad to see Pratyusha Banerjee is your friend! :)

7 years ago Happy Birthday Tina, and glad that Pratyusha Banerjee is your friend. Love you Pratyusha.

Ljuba-55 7 years ago I'm so glad to participate in your celebration and your friend Pratyusha Banerjee. happy birthday Tina Dutta