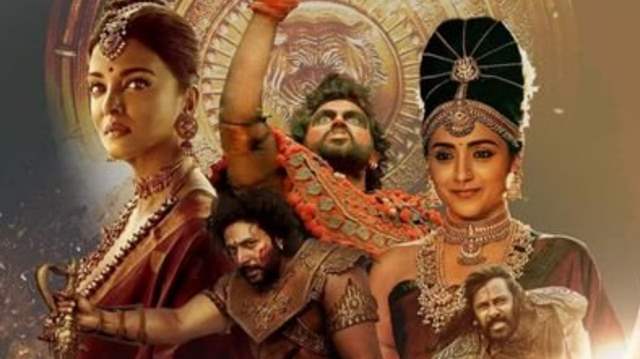 The much-awaited, biggest multilingual project of the year - ‘Ponniyin Selvan- Part1’s teaser is out. The magnum opus is a cinematic adaptation of Kalki’s evergreen Tamil novel that was serialized in the 1950s.

The teaser of the historical- drama was launched at a grand event in Chennai today along with the star cast and the team. The teaser was unveiled digitally by legendary actors superstar Amitabh Bachchan, Mahesh Babu, Suriya, Mohanlal, and Rakshit Shetty.

The teaser revolves around the power struggle of the Chola empire during the 10th century and will hit the screens in two installments. Helmed by one of the most renowned director Mani Ratnam, the historical drama will feature celebrated actors in powerful roles, such as Aishwarya Rai Bachchan as ‘Nandini’, Superstar Vikram as ‘Aditya Karikalan', Karthi as ‘Vanthiyathevan', Trisha as Kundavai, and Jayam Ravi as Arunmozhi Varman.

It is the first of two film adaptations of the 1955 book Ponniyin Selvan by Kalki Krishnamurthy. Ratnam co-wrote the script for the movie with Elango Kumaravel and B. Jeyamohan.

Midway through the 1990s and the beginning of 2010, Mani Ratnam attempted to adapt the book but was unsuccessful. In January 2019, with Lyca Productions on board to provide financing, Ratnam restarted the adaptation, referring to it as his "dream project." Despite having a number of actor and crew changes, the movie began filming in the middle of December and was finished by the end of September 2021, despite having to stop twice because of the COVID-19 pandemic. The movie was primarily filmed in India, with a few portions also being filmed in Thailand.