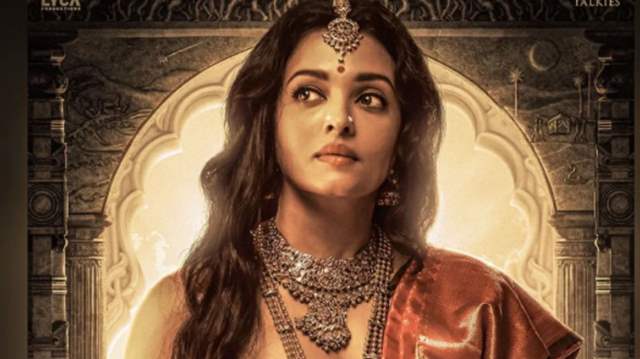 Since the past few days, makers have been revealing the character introduction posters of the cast members and fans cannot be more excited to witness the film. The creators of Mani Ratnam's Ponniyin Selvan today revealed a fresh poster of Aishwarya Rai Bachchan to unveil her character, after the character images for Chiyaan Vikram and Karthi.

Taking on the part of the vengeful queen Nandini, the actress will be seen in a royal look in the movie. She has appealing eyes, long tresses, and a magnificent appearance in a saree.

Taking on their social media handles the makers revealed the poster along with a note that read, "Vengeance has a beautiful face! Meet Nandini, the Queen of Pazhuvoor! #PS1 releasing in theatres on 30th September in Tamil, Hindi, Telugu, Malayalam, and Kannada."

Aishwarya Rai Bachchan will make a comeback with Ponniyin Selvan after her last movie was last seen over four years ago. Aishwarya discussed Ponniyin Selvan in an interview with Film Companion, referring to it as Mani Ratnam's "dream project." The actress quoted,

“When he came and he shared and he said, ‘You know this is something I wanted to make right at the beginning. I’m like I’m so privileged and so blessed that he asked me to be a part of his dream. I think just to begin at that in itself is so fulfilling."

The 1995 book of the same name by Kalki Krishnamurthy served as the inspiration for the upcoming historical drama. In terms of the storyline, the film tells the story of one of the most powerful rulers in the South. The film's background music was composed by Academy Award winner AR Rahman and is produced by Lyca Productions and Madras Talkies.

2 months ago IMHO - this picture is at least 10 years old (or made so with technology) - not criticizing the look/age/weight, should accept it with grace - makers should use current picture!

+ 8
2 months ago this promo poster looks more like her

+ 4
2 months ago Aishwarya would make a good Nandini ✨ Nandini Devi is ethereal, she looks like a dream, and so is Ash here. She has an intriguing, complex personality. In fact one of the most important characters in the whole story. She's not someone who can be put in a box. She's neither grey nor black. I hope Ash would do justice to her character. Casting is good for everyone , but could have been even better.

+ 10
2 months ago Wow she is looking so beautiful here. Cant believe it.

+ 11
2 months ago Stellar Starcast for this movie is amazing and it is great to see for my favorite novel to com alive.Nandini is a very important character and I am sure Aushwarya will do justice to it.Vikram, Karthi, Jayam Ravi, Trisha, Aushwarya Rai and many more popular actors on this movie, cannot get any better.

2 months ago Please accept the fact that she does not look like a 20-year-old. Though that does not matter because it is her decision to work or not, the arrogance she has does not look good at all. On top of that, the dressing makes it worse. She is highly pompous.

+ 7
2 months ago she looks like the old Aishwariya Rai. In the cannes she looked not like her - with botex etc.