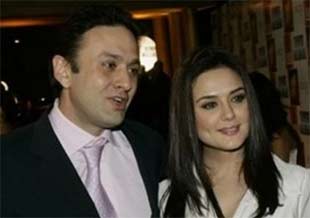 Mumbai police Tuesday started recording the statement of Bollywood actress Preity Zinta who has accused her former boyfriend and business partner, industrialist Ness Wadia, of allegedly molesting and threatening her.

The actress came in the evening to the Wankhede Stadium where the alleged incident involving Wadia took place May 30 and was closeted with the investigators till quite late.

Among other things, the police questioning is expected to reconstruct the sequence of events that night during an IPL match played by their jointly-owned King XI Punjab Team.

Police are also likely to visit the couple of places in the stadium where the alleged incident took place as part of the investigations, and get the names of more witnesses who were present at that time.

The 39-year old actress had submitted a written complaint to the Marine Lines Police station here June 12 making various allegations against Wadia, who denied them as "false and baseless."

Later, police recorded the statements of at least half a dozen other people, including some eyewitnesses in the case.

Soon after lodging her police complaint, Preity left for a foreign tour and returned to Mumbai two days ago (Sunday).

Police officials remained tightlipped on the line of questioning, whether it was completed or would continue tomorrow (Wednesday), their plans to question more witnesses and further of action in the investigation.