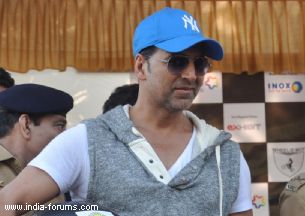 Hailing the eastern metropolis as the "city of sports", Bollywood actor Akshay Kumar Friday revealed that he played soccer in school and was the goalkeeper.

The "Khiladi" star reminisced his three years spent in the city and fondly recalled his love for football.

"I used to be a goalkeeper in my school. I call myself, more than anything else, a sportsman," he said at a programme in East Bengal club.

"Kolkata is the city of sports and I love this city. Three years of my life I spent in this city and I learnt a lot," said Akshay, who along with actress Sonakshi Sinha, would participate in a cultural gala organised by the soccer giants at the Salt Lake Stadium.