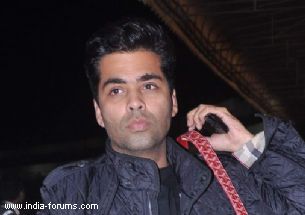 Filmmaker Karan Johar, 41, who has been in the favour of adoption, says it is natural to have parental feeling at his age.

The "India's Got Talent" judge got emotional on the sets of the reality show when he saw a troupe of children performing an act. Karan later hugged a 7-year-old child from the troupe and said he wants to adopt him.

"I don't have a child and at an age where I should be a parent so, obviously there are some parental instincts that creep into my psyche. I love children. Sometimes, you do strike a chord when you see any child - their vulnerability, their passion, talent, sincerity and sometimes just the smile," Karan told IANS.

"That can touch us and strike a chord as a human being. Parental feeling is very natural for me at this age whether I will act on it, only the future will decide," he added.

The son of late producer Yash Johar says his company Dharma Productions is his baby.

"I am building my company. My big baby is my company and I am seeing my company, which is my child first, evolve and grow and when my company graduates, then perhaps I will think about it," said the "Kuch Kuch Hota Hai" director, who has no plans of getting hitched.