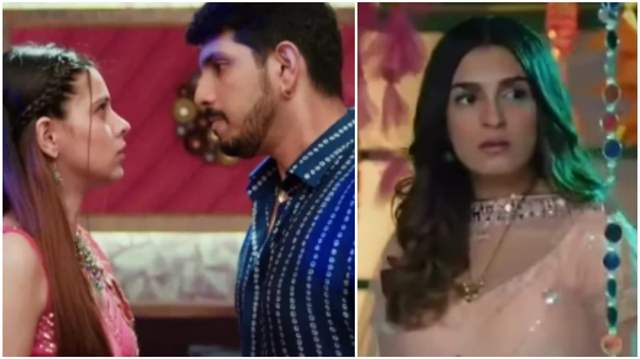 Star Plus show ‘Pandya Store’ is getting the love from the viewers. The current track of the show revolves around Shweta being blackmailed by Deven. She has introduced him as her brother in front of the family. However, Deven is blackmailing Shweta with her video and is making her do criminal acts.

In the upcoming episodes, Shiva and Raavi share an argument and Shiva leaves the room in anger. Amidst Navratri celebration, Raavi is forced to dance and she dances with Shiva but he behaves rudely. Shweta tries to get the locker keys as Deven pressurizes her. Somehow, Shweta manages to take the keys and give it to him. He rushes towards Suman’s room to rob the locker. He fills the bag with money. Shweta comes there and asks him to hurry up. She thinks that he will continue to blackmail her. She breaks his phone and beats him up.

Rishita notices Shweta and Deven missing and goes to check in Suman’s room. Shweta try to stop him and hit him but he takes the charge and take some money and leaves from the window. He hits Shweta on her head. She faints. Rishita calls the family and they get stressed for the robbed money as well as Shweta’s health. She gains consciousness and states that a man dressed in a saree tried to rob the entire locker but she tried to save the bag. Suman gets happy that most of the money is saved but gets disappointed as two lakh rupees go missing. Rishita finds it fishy.

+ 3
1 months ago Still don’t know why Shiva is mad with Raavi but I do hope he manoes Raavi soon and we get to witness beautiful scenes from Kanwar Dhillon and Alice Kaushik love them both so much.

+ 11
1 months ago Looks like someone likes Shiva’s angry mode, him treating Raavi poorly again, hence we got the episode written update after months, otherwise PS has stopped getting updates long time ago. Shiva-Raavi story is on rinse, repeat and recycle mode, nothing new there at all. That said, I am enjoying Shweta taking Kandyas for a ride. They totally deserve it for believing a stranger and putting her above everyone else. I really wished Deven took the 50 Lakhs in the first try as Kandyas deserve to be kangal again.

+ 3
1 months ago Enough of misunderstandings between ShiVi. They keep repeating this, and never write good progressive positive tracks. Like Education track that they scrapped.Others: Better focus on Pandyas & Pandyastore . who even is shweta & her khandan? Complete misfit story in well established show!