Paa is a beautiful contemporary tale of human relationships, how easily they can be broken mended healed renewed refreshed cherished and adored. The movie quite simply in a span of 2 and a half hours shows the two faces of relationships. One- how simple they are to form and break. Two- how difficult it is to fulfill or maintain them.

We basically see the movie through the eyes of Auro (Amitabh Bachchan), a twelve year old kid, who suffers from a rare genetic disorder called Progeria. Auro is like typical twelve year old, with his own share of tantrums but a striking streak of understanding in him. He is raised by his single mum Vidhya (Vidya Balan) who is a gynecologist, and his grandmother (Arundhati Nag) who he naughtily calls 'Bum'. Fate being such an unpredictable thing reunites Auro and his father MP Amol Atre(Abhishek Bachchan), through a school competition. 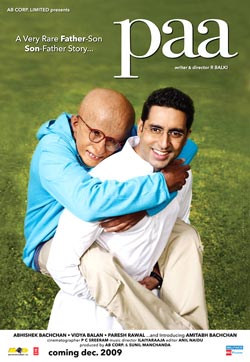 
The movie will surprise you in a superb manner. Right from unexpected turns to witty one-liners like- 'Google se bachke kahan jaoge?' What's fresh about this movie is the way the characters approach problems that seem insurmountable so coolly. The way Bum handles the news of her daughter getting pregnant out of wedlock and the way Amol handles the media over news of his lovechild is an example.

There are few places that you'd wish you did not have to see. Like the one where Amol and his father discuss shit while having tea and biscuits. And the other where Auro describes how the potty of the whole world goes inside your body if you eat fish. Yupp. Seafood lovers beware. You might end up wanting to puke!

The picturization of songs are beautiful and actually adds sense to the story. For example, Ittefaq se beautifully portrays the journey of Vidhya from being 'so-in-love' with Amol to the twin pack pregnancy kit.

Big B has done complete justice to the role of Auro. Although at times you can see through Auro and into Amitabh, for the major part, Auro keeps you so engaged that you forget that's Amitabh Bachchan playing that role! As Auro, he takes you through highs and lows, laughter and choky throat.

Vidya Balan once again has proved that she is the queen of effortless acting. She looks very Indian and very beautiful in her cotton saris. Even in her western wear she is fine, except that her strut was a tad bit gawky as if she wasn't confident about her high heels.

Abhishek Bachchan is squeaky clean and good-looking. He is compelling. But he still hasn't reached the point where he can stir up your emotions.

Paresh Rawal is good as ex-politician Atre. When he makes a fool out of himself while talking for the first time ever to his grandson, his expression is worth looking at!

Arundhati Nag is perfect as Vidya's onscreen mother. She has the same effortless style as Vidya that makes her endearing.

Ilaiyaraja's music is soothing and at times teases and tickles you. R. Balki's direction is first-class. Hats off to make-up artists Christien Tinsley and Dominie Till.

Paa is a film that will make you laugh and cry when you're inside the theatre. But when you come out, you'll be surprised you have a self contented smile on your face!

Hina Khan on how due to dusky complexion, she wasn't cast in a ...