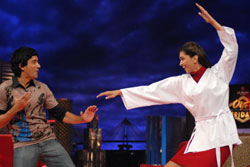 Deepika Padukone who celebrated her 23rd birthday on January 5th will be Farhan Akhtar’s next guest on Oye.. It’s Friday this weekend..

The gorgeous actress had a whale of a time on sets, but she she found it tough to express her thoughts in Hindi. Not many know that Deepika knows more than five languages, including Hindi.

“While answering or discussing aspects of her life, Deepika would repeatedly break off and start speaking in English, and Farhan found it hard to get Deepika back on track into speaking Hindi”, exclaims our source.

Now that makes one wonder how Deepika delivers such long dialogues in Hindi in her maseledaar flicks!! Or is it that she has been spending too much time learning Chinese for her much awaited film, ‘Chandni Chowk to China’ that she has lost her grip on Hindi language?

13 years ago You cant blame her. Its not her mother tongue.