View Profile
Voted as the “Sexiest Woman in the world”, beau queen 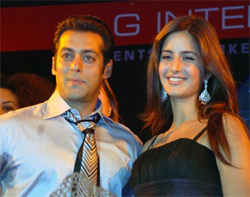 Featured Video
Katrina Kaif will be celebrating her birthday in Ooty with her partner and Bollywood’s bad boy Salman Khan.

It’s been heard that Salman will be traveling all the way to Ooty, on 16th July, to celebrate his girlfriend’s birthday, putting aside all the rumors of his break-up with this gorgeous babe. Katrina is nowadays shooting there for Ajab Prem Ki Ghazab Kahani with co-star Ranbir Kapoor. The film is been directed by Rajkumar Santoshi.

Recently there had been rumors about the couple’s break-up and that Salman slapping Kat baby twice, but they managed to put everything aside and proved everyone wrong. In the mean time they were spotted at many nightclubs, restaurants, parties and recently at Vipul Shah’s, Singh is Kinng’s music launch, too.

We wish Katrina Kaif a very happy birthday in advance and best wishes for her upcoming movies also.