Once Upon A Time In Mumbaai – Interesting! 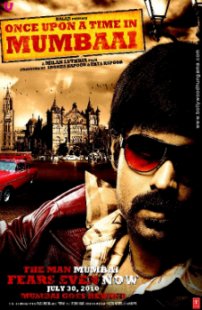 Once Upon A Time In Mumbaai is allegedly the story of Haji Mastan and Dawood Ibrahim- the names that made it big in Mumbai's mafia. Let's not even get to comparing the film to the real story. That would just steal the fun out of it. Instead I recommend, watch the movie with a less critical eye and you have entertainment promised.

Sultan Mirza (Ajay Devgn) enters Mumbai city as a child who escapes the deluge of Chennai. Little by little, he makes it big as a don in the city of dreams. His power even gets him the Bollywood Czarina he loves- Rehana (Kangana Ranaut). Sultan Mirza's power is sinfully attractive to those who look at the short route for success. Looking up to him, Shoheb grows up.

Not surprisingly…Shoheb (Emraan Hashmi) eventually wiggles his way in to Sultan Mirza's inner circle. Sultan thinks he's hired a good hand to help. He's got no idea this lad won't stop one seat short of his throne. Sultan has no clue he's got his eye entirely on the throne…

Wilson, is a cop sent to Mumbai city to clear it of all the dreg. He's got his eyes on Sultan and his men. He's decided to bring him down. He's a good cop. At one point…the cop agrees that the hardest thing to do, is to decide who is more bad among two bad men, more important to aim the noose at.

The chase game of each of these men (for Sultan…it's to find the balance between right and wrong…for Shoheb it's to get his top spot…for Wilson it's to bring the bad guys down) makes up for the entire movie.

The movie has some downsides. The fact that they show Shoheb growing up from a kid to an adult but no change in Sultan is weird. He practically remains as unchanged as a vampire through the whole decade. Some continuity glitches as the replacement of Ajay Devgn's smoke also act as a bummer. But apart from this the movie is engaging. Yes, there are some dragging moments after interval and they could've chopped off bits and pieces in that part.

The dialogues are among the best things this film's got! Wow! Were people actually so bitingly witty in those days?! The songs are like a cup of strong tea…invigorating, yet pleasurable within limits.

The makeup dada for those except the core cast members seems to have lost his fine touch. You can clearly make out the border lines of fake moustache and beard. However, overall with the locations and costumes, the old world charm is definitely captured in the movie.

Ajay Devgn is powerful with his performance. He looks every inch tailor stitched for the role. Emraan Hashmi's face looks so apt for the stubborn, wicked and overtly ambitious boy with no scruples. Thankfully, he's grown out of the wet-smooches and done a nice serious job. Randeep Hooda should be a happy man. He's been given a crisp role and he's done a great job fulfilling it.

Kangana Ranaut has crossed leagues with her performance. She's got a long way to go yet…no doubt…especially when it comes to her crying scene in the climax…but she has improved and she deserves applaud for that. Prachi Desai looks sweet. She's got talent and she could've been given a slightly better scope in the film.

Another story on Mumbai, albeit of yesteryears, stands to be intriguing. Not at all worth a miss!