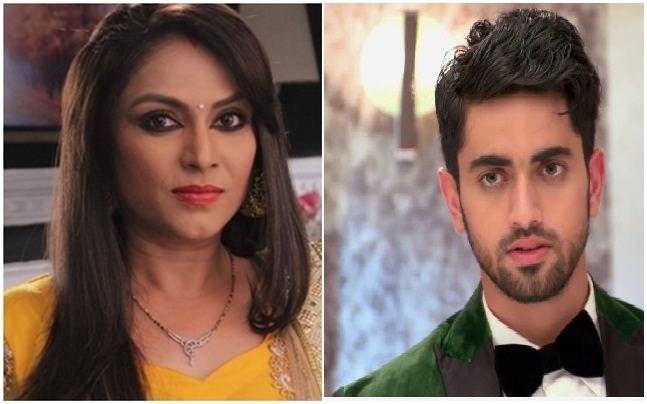 As we have earlier reported about Kunj's Death and the upcoming leap on the show Tashan-E-Ishq, a new dramatic twist is about to happen that will cause a lot of commotion on the show! While everyone is mourning, Anita is causing more trouble in the house!

In the upcoming sequence, Twinkle calls Leela and informs her about Kunj's death. Leela is shaken by the sad news and informs everyone in the house. Dadi and Leela start crying and the whole family is shocked.

Meanwhile, Yuvi knows that it was Anita who planned and killed Kunj. So Yuvi goes to confront Anita. Yuvi is extremely infuriated and tells her that he is going to expose her truth in front of everyone and get her arrested. Anita acts smart and quickly picks up a knife that is placed nearby. At first, it seems like Anita will try to kill Yuvi in an attempt to erase all evidence. But instead, she places the knife on her neck and threatens Yuvi that she will slit her throat if Yuvi speaks about it to anyone!

It is obvious that Yuvi will not let Anita hurt herself, but since Yuvi is turning positive and is really upset about Kunj's demise, the question that arises now is that how will Yuvi get justice for Kunj?

6 years ago Love you Sidhant Gupta.You are the best part of Tashan -E-Ishq.

6 years ago Sidhant Gupta is a very talented actor he will be missed in Tashan-E-Ishq.
Anita should definitely slit her throat.

6 years ago Sidhant Gupta will be greatly missed Tashan E Ishq. He had great chemistry with Jasmine Bhasin.

+ 8
6 years ago A lesson to every pregnant women who is a widow? Marry ur biggest enemy, who even tried to disfigure ur face wid acid, disfigured is ur sister's face wid acid n tried to kill ur sister, just to give ur child a father's name?

+ 6
6 years ago Sidhant Gupta is super amazing. Love his friendship with Jasmine Bhasin and their on-screen chemistry rocked!

+ 2
6 years ago I think she should cut her throat as her drama has been going on for long. Come on Essel Vission productions and subhash chandra. U can do better. Please make cherry good, make Anita die and introduce a new evil character.