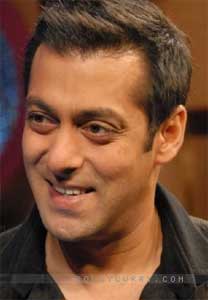 Salman Khan is fed up of being repeatedly asked about his 'Veer' co-star Zarine Khan's resemblance to his lady love Katrina Kaif. The star insists he knows that they don't look like each other at all.

The actor, who appeared on Zee TV's dance reality show 'Dance India Dance 2', told the show's grandmaster Mithun Chakraborty: 'Dada, the press guys are hell-bent on making me accept that Zarine ('Veer') looks like Katrina... and I'm tired of telling them she is not even close to her.'

'Nobody knows Katrina better than me and I'm telling you guys, Zarine does not look like Katrina,' he added.

Salman thoroughly enjoyed his stay on the sets, said a source.

When the actor saw the male participants lifting the girls high up in the air during their act, he joked: 'Guys, now this is something I just cannot do! I may lift really heavy weights, bench press more than most men do but I can never lift a woman that high up in the air.'

Releasing Friday, 'Veer' is Salman's pet project. Written by the actor himself 20 years ago, the movie is set in colonial India.