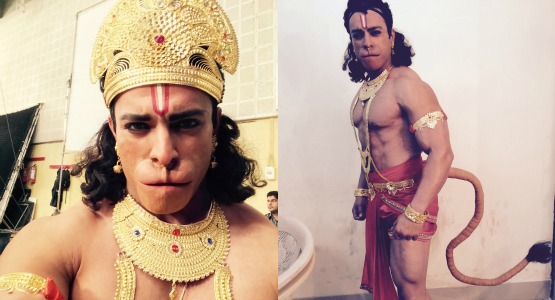 It's raining shows these days on TV, as recently we reported about Panorama Productions launching their show on Colors, now another show to be launched is Hanuman on Sony TV.

As the name says it all it's a mythological show depicting the tale of Lord Hanuman. While the deity character has been popularly seen in the epic show Ramayan, a full-fledged show on Hanuman will go on floors soon.

Our source says, "Contiloe Productions is all set to launch their mythological show Hanuman. Actor Nirbhay Wadhwa has been roped in to essay the character of Hanuman."

"The show is expected to go on floors by mid march," adds our source.

When contacted Nirbhay, he said, Yes, I am portraying the character of Hanuman. I am very excited to play a positive character that requires lots of efforts and I am preparing myself for that. I am most of the time using harness and my character needs make up to be done prior the actual shoot, so it's a quite challenging task and I am ready for it."

We wish Nirbhay all the best for his new venture!

+ 6
6 years ago Hmm, the costume and makeup doesn't look very convincing, but let's see if the actual show makes him look more like Hanuman. I hope this show doesn't go the route of Jai Jai Jai Bajrangbali with 90% fiction, they should actually do justice to the storyline.

6 years ago Hakim to hanumaan...love you as hakim... BKVPMP plzzz be good with your tracks

6 years ago From hakim khan to hanuman. Best of luck nirbhay. BKVPMP rocks.