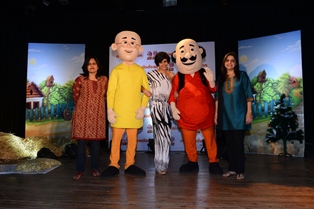 It's that time of the season, where one is merry and enjoys the warm and fluffy holiday feeling. True to the festive spirit, Nickelodeon kicked off its holiday programming with a month full of Christmas specials, including Motu Patlu Movie, Dora Live Theatrical, Nick Lift your Gift' contest, Christmas specific episodes and much more. To celebrate the festival in Nick' style, the stylish Mandira Bedi joined Nickelodeon to make Christmas even more Nickdaar'!

On the programming front, Nick is all set to air a Christmas Special Episode' of the awesome twosome Motu and Patlu on 25 rescuing the Real Santa Claus' from the hands of the devil and bringing him to their home, Furfuri  Nagariya. Adding to the celebration, Nick will premiere a Christmas special movie titled Motu Patlu - Mission Moon' on 25th scientist who is proving to be dangerous to Mother Earth.

To announce the Christmas specials, the hilarious duo staged a live theatrical performance in Mumbai.

Enacting the Christmas episode with some rib-tickling antics, Motu Patlu also had the gorgeous mummy, Mandira Bedi, as the special guest at Furfuri Nagariya, who danced to the tunes of Motu Patlu theme song and joined the audience in the celebrations.

Commenting on the Christmas special initiatives, Nina Elavia Jaipuria - EVP & Business Head, Kids Cluster, Viacom18 Media Pvt. Ltd. says, "Nickelodeon dons the Santa hat this holiday season to entertain and engage kids of all age groups across platforms. From comic books, to a television show, 70 minutes movies and digital games, the Motu Patlu franchise has come a long way and promises to entertain kids this Christmas as well. It's a pleasure to have Mandira Bedi join us in the celebrations, as she is a true representation of a smart and caring Nickelodeon Mother." 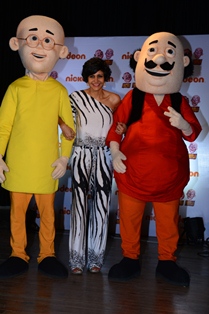 Commenting on the occasion, the Multi-Talented Mother of One, Mandira Bedi said, "Christmas is around the corner and nothing could be better than to celebrate it with children and watch a live adaptation of a famous television show. I have grown up reading Motu Patlu comics and I thoroughly enjoyed their live stage performance today. In fact, I am definitely going to spend my Christmas watching the Motu Patlu movie and the special episode on the 25th, you should watch it too."

Nick is further engaging it's viewers with the Nick Lift Your Gift' contest, running throughout the Christmas holidays. The channel is calling out to kids to participate in the contest by simply watching the two popular shows, Motu Patlu and Pakdam Pakdai, between 6 pm and 7 pm every day and spot the gift on the screen. Participants have to send the name of the gift to win PSPs, iPods, mobile phones and much more daily. To participate, one can log on to www.nickindia.com or SMS or use IVRS. [For participating via SMS, contestants have to send SMS Nick' Option A or B Your Name to 56882. One can also dial 5056882 from Vodafone, Aircel, Airtel, Idea, Reliance, Tata mobile & Airtel Landline or dial 1255568 From BSNL Landline, mobile & MTNL mobile.]

Joining Nick in celebrating the holiday season is the action-adventure channel Sonic, which will air content that brings the best of action, thrill and comedy. In the month long celebrations, Sonic will air some very popular shows like Supa Strikers, Power Rangers Super Samurai and Zatchbell, along with other on-going power-packed shows. There's more! The famous Nicktoon Keymon Ache, along with his friend Rohan, takes a ride to an obscure plant to rescue Nani in the Keymon & Nani in Space Adventure' movie, airing on the channel on 25th December at 9 am.

Taking the Christmas cheer beyond television, Nickelodeon, in partnership with Live Viacom18, is all set to host the widely known International theatrical "Dora's Pirate Adventure" from the 27th December. Fans can watch Dora LIVE on stage in Siri Fort, New Delhi, as she embarks on her pirate adventure with her best buddy Boots and her cousin Diego. One can buy tickets by logging on to http://in.bookmyshow.com/concerts/dora-the-explorer-tickets/ or http://www.mycity4kids.com/Delhi-NCR/Events/Nickelodeons-Dora-the-Explorer-Live-Doras-Pirate- Adventure_Siri-Fort-Road/23623_ed.

There is also a whole host of interactivity for the tech savvy audience. They can watch videos of their favorite show - Teenage Mutant Ninja Turtles (TMNT) by logging on to www.sonicgang.com and win cool TMNT merchandise. On the other hand, www.nickjr.com is hosting many Do It Yourself' activities to engage the parents and toddlers together while offering cool Nick Jr. goodies.

So, tune in to Nickelodeon and join us in the celebrations for this holiday season!

Chandani02cr 9 years ago I don't agree with ash-abhi pair haters, they were sizzling hot in GURU and it was a hit. They looked cute in movie bas itna sa khwaab hai too. I am excited to see them together.

Kai. 9 years ago i don't find them interesting on screen!! i want abhi but get a diif actress!

taral83 9 years ago they maybe a hit couple but they make flop movies............I actually can't stand them together both onscreen and offscreen. Their jodi lacks something, the x factor that SRK and Kajol have or shahid and amrita, even abhi and rani, salman and madhuri.......they just don't mix for some odd reason. well good luck to them anyways......... :/

NautankiSaali17 9 years ago can we seriusly get a break from them? i agree with others...some famous and awesome jodies as mentioned here and also there are possibility for new ones as well..why not bring some variety coz m seriusly sick of seeing them together....argghhhhhh

ixray 9 years ago no no i want rani n abhi .....the only time ash has any facial expressions is when she dances. ash is beautiful but her acting sucks.

uknaik99 9 years ago I read it is Katrin and Abhishek for this quick comedy from santhoshi, not Aish.. this is new news...

Vishakha_Sakhi 9 years ago Hmmm I agree that Abhi is gr8 in comedies, Aish is so-so...lets wait and see.