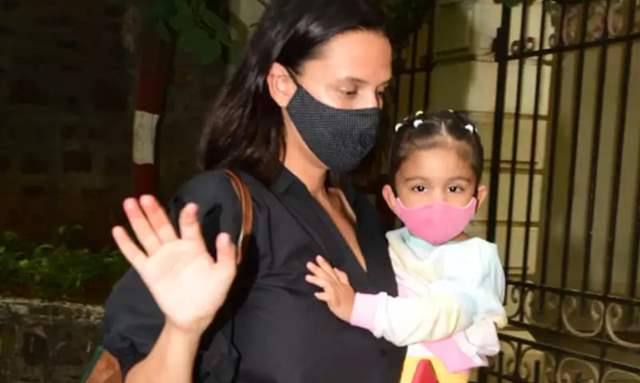 Actors Kareena Kapoor Khan and Saif Ali Khan will welcome their second baby somewhere in march and the fans are extremely excited for the good news. While there is a lot to consider before the baby’s birth, the actors have consistently given parenting goals.

Meanwhile, Kareena continues to work on her radio show which recently saw the appearance of Neha Dhupia. She talked about parenting, motherhood, and even answered questions pertaining to daughter Mehr.

Neha revealed that Mehr is obsessed with nail paint and added that she does not use it on her nails but she thinks it is her tool to colour everywhere.

She further spoke about Mehr dating in the future and added that she will leave it for Angad to decide. Considering her response it seems, Angad is too protective of his daughter, isn’t it cute?

The 40-year-old actor revealed that she is glad that Angad is not in the house right now or else according to her, he would be in the frame right now and say, ‘Who said Mehr will go out with boys?’.

For the unversed, Angad and Neha welcomed Mehr their first kid Mehr in November 2018, six months after their marriage. The lovebirds got hitched in a private wedding ceremony.

On the other hand, the couple often shares pictures and videos of themselves and their angel with their fans and they just cannot have enough of the couple.