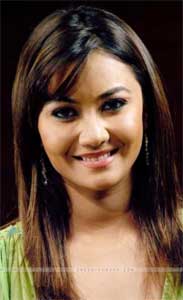 Bollywood actors work really hard to get into the skin of their character. No different was the experience of Nausheen Ali Sardar while preparing for her character in her upcoming film 'Three - love, lies and betrayal'.

The film is produced by Vikram Bhatt and stars Ashish Chowdhry and Akshay Kapoor opposite her. Nausheen, who plays a violin teacher, apparently took violin lessons to make her character appear realistic. And yes, learning the musical instrument is not an easy task and Nausheen worked really hard to learn the technicalities of playing a violin.
"It's absolutely not an easy instrument. But I was quite passionate about learning it and according to my guru, I have been a good student. I did learn it fast.Its alright I didn't get to play it in my movie Three, but I'm sure I will continue practicing it. " Says Nausheen.
Ironically, Nausheen's enthusiasm for playing the violin did not receive its due as none of the scenes in the film required her to play the instrument ultimately.
All we can say is, it's alright if you didn't get to show your new skills in the film,what's important is striking the right chord with the audience.  And with all that hard work and enthusiasm, we are sure you will reap all the benefits.
Featured Video