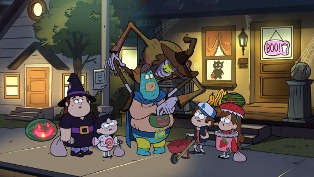 Things take an interesting turn at Gravity Falls as Mabel places a bet with Grunkle Stan, the owner of 'Mystery Shack'.

She decides to teach grumpy old Uncle Stan a lesson or two in love and kindness by demonstrating  that she can make more money at the Mystery shack than him by treating visitors nicely rather than being rude and cranky all the time.

But turns out, it is easier said than done. As Grunkle Stan heads off to win a fortune on a television game show, Mabel is left on her own to deal with not just lazy employee  but an actual monster captured by none other than Dipper.

Will Mabel manage to prove herself in the eyes of Grunkle Stan? And more importantly can Mabel keep her calm amidst the chaos?

vishnukumar7 9 years ago seems like baccha movie..who wanna go to the theater

mysticgoryfilms 9 years ago All of Kjo's movies these current times have been OK. I Hate Love Stories, MNIK, KANK....all have been very mediocre. So, I do not know how this one will fare out.

Btw, does new talent in Bollywood always have to be linked to an old talent from Bollywood? Two of the people mentioned are sons & daughters of big stars. Give me a break!

The guys are ordinary looking. The girl looks like Prachi Desai from that picture. But need a close-up version.

mihali7 9 years ago @Nikhi... tht is the OTHER Siddharth Malhotra this sexy beast is someone completely new

live_life 9 years ago OMG looks so cute! and fresh, hope its fun!

Pirated_Fun 9 years ago i HEARD Siddharth Malhotra. is the gay partner of Kjo..

manur 9 years ago woww..kjo back with something young.... looking forward to it..

Nikhi. 9 years ago Siddharth Malhotra? Isn't he the director of MNIK, and of DMG?

LimitLessFan 9 years ago wow a movie without srk ...... rocking ... love it but new faces my foot , all are established filmmakers kids , no real talent