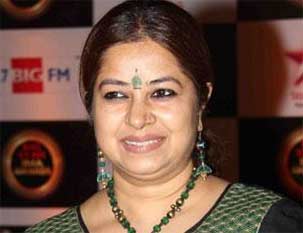 Playback singer Rekha Bhardwaj, who went behind the mike for Madhuri Dixit's special song "Ghaghra" in "Yeh Jawaani Hai Deewani", has sung two others for her in "Dedh Ishqiya" as her voice is apt for the "Ek do teen" star.

"People like our combination. I think my voice suits her. My voice goes well with her dance and expression," Rekha told IANS.

The two songs by Rekha - "Hamari atariya pe", penned by Gulzar, and "Jagave" are picturized on Madhuri and many feel that the former number recreates the diva's 1990s magic.

Many feel Rekha is choosy with her songs, but she says decision depends on music directors.

Director Abhishek Chaubey presents Madhuri as a very strong woman in "Dedh Ishqiya" and she even has some intimate scenes with co-star Naseeruddin Shah, who had also featured in the original that saw Vidya Balan playing a very strong character in an unconventional yet entertaining story.

The sequel too offers a lot of interesting twists and turns with Arshad Warsi and Huma Qureshi in the cast.