After their successful debut in Student of the Year (2012), Varun Dhawan and Alia Bhatt are teaming up once again to burn the screens with their intense chemistry. Under Dharma Productions and debutant director Shashank Khaitan, the duo reunites in a different avatar in the upcoming flick Humpty Sharma Ki Dulhania. This pair of talented newcomers will be working with renowned director and producer Karan Johar for the second time.

Humpty Sharma Ki Dulhania's official album released on 19th June, 2014. It features six varied songs, though the majority of the lyrics have been penned by the talented Kumaar. BollyCurry took up the task to go through the album and provide a review for your reading pleasure; so read on to see what we think of the music of this high budget film.

First up is the foot tapping song "Saturday 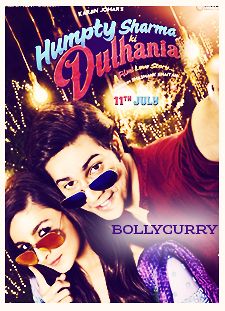 Saturday". This upbeat Punjabi number has been recreated for the movie by the talented music composing duo of Sharib and Toshi Sabri, and features the addition of Akriti Kakar to provide female vocals. The original Punjabi song, also of the same title, was sung by Indeep Bakshi and Badshah and composed by the Titans and Badshah. This is the ultimate party song that has already been making its way steadily up the charts. Definitely give this fast paced dance song a listen!

Next up is "Samjhawan", an adaptation from the classic "Main Tenu Samjhawan" sung by Rahat Fateh Ali Khan. With the vocal combo of Arijit Singh, Shreya Ghoshal and the Sharib-Toshi duo, this romantic number is soothing to the ears with the soft instrumentals and easy lyrics, despite being Punjabi. The Sabri duo teamed up with Jawad Ahmad to compose this magical number. While the song fails to stand up to the original, it is definitely worthy of a listen!
"Daingad Daingad" is a peppy number that brings together the flavour of various talented artists - Deepali Sathe, Divya Kumar, Niharika Sinha, Akriti Kakar, Pratibha Baghel and Udit Narayan. This is a fun track composed by Sachin-Jigar. The uniqueness of this track is bound to rock the dance floor at any typical wedding ceremony.

The party number "Lucky Tu Lucky Me" is up next. This energetic and fresh track is sure to be a hit at the parties due to its exceptional beats and catchy lyrics. Benny Dayal and Anushka Manchanda did wonders with the vocals, as did Varun Dhawan, despite the actor not being a singer. Sachin-Jigar proved their worth once again with this composition.

With its upbeat music, "Emotional Fool" is a Sharib and Toshi Sabri dominated track. Not only did the dynamic duo compose the track, they also lent their powerful vocals to make this track even more phenomenal. With heavy beats and powerful instrumentals, "Emotional Fool" will have one's foot tapping and head bobbing.

Finally, the soundtrack concludes with "D Se Dance". This peppy number was sung by Vishal Dadlani alongside Shalmali Kholgade and Anushka Manchanda. Sachin-Jigar composed this Punjabi number that is a sure inclusion at a Sangeet's playlist. Upbeat and instrument savvy throughout, it's hard to resist getting up and shaking a leg.

Humpty Sharma Ki Dulhania carries an average album with a mixture of original and recreated songs. The primary audience seems to be the younger generation who would most enjoy the peppy and club-worthy songs. Owing to the fact that this will mark the return of Varun Dhawan and Alia Bhatt's jodi, BollyCurry hopes that the film lives up to the expectations of the audience. As we bid adieu, we wish the entire team of Humpty Sharma Ki Dulhania all the best and encourage you to give this album a listen and let us know your thoughts in the comment section below.
Writer: Amanda H.
Editors: Mohini N. and Gunia M.
Graphics: Shikha A.
Do you a suggestion or comment for BollyCurry? Drop us a PM at BC_Dropbox today!
9 Likes