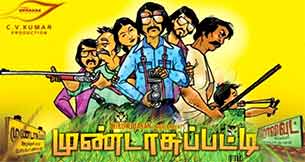 The makers of upcoming Tamil adventure comedy "Mundasupatti" have taken the online marketing space to higher levels of innovation. They have created an interactive application that allows people to create their own avatars akin to characters from the movie.

The app has been created on the website www.mymundasupattistyle.com.

"The app has been designed by mixing various styles of Mundasu (turbans), retro-styled eyewear and hairstyles from the 1980s. Along the lines of the posters and trailer, the retro theme of the online application is expected to kindle a sense of the 1980s amongst the viewers," read a statement from the film's co-producer Fox Star Studios India.

"Mundasupatti", which has been directed by debutant Ram Kumar, has been jointly produced by Fox Star India and C.V. Kumar.