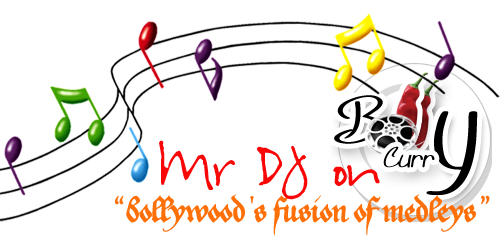 Of late, Bollywood Music Industry has been growing rapidly, not only in terms of young and fresh talents joining the marathon, but also how a wider range of music potentials are experimented each year. From various mash up editions, to remixes, are being introduced. Medleys, have been a part of the old times, when mixing songs from different movies during a wedding occasion was very popular. Basically, while there's just so much going on around, how do you expect me, the DJ, to just sit and procrastinate my work? What am I being paid for? Your entertainment! So here's BollyCurry's favorite DJ presenting news on how B-Town has been coping with melodious medleys!
Mujhse Dosti Karoge! 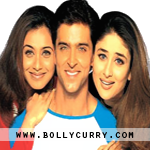 This Hrithik Roshan, Rani Mukherjee, and Kareena Kapoor starer, also presented a wonderful medley during the engagement sequence of Tina and Raj. The medley has a dramatic start with the break of a glass, and after there's no stop. "Naa Chahun Hira Moti" is the first in line, followed by "Pyaar Mein Sauda Nahin", "Jhooth Bole Kawwa Kaate", "Diwale Dulhaniya Le Jayenge" and many others, each symbolizing the feeling of that character, and how the love triangle between the protagonists was shaping the plot. Once again, some amazing moves by the respective actors, and definitely a treat to watch!
Kahin Pyar Na Ho Jaaye 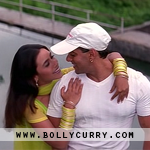 The love story of Prem (Salman Khan) and Priya (Rani Mukherjee) had not even begun, when this medley was brought in. Different then the rest, this medley was a fusion of various heartbreaking and rather sad songs, after Prem's break up with Nisha (Raveena Tandon). Not any occasion or wedding picture, instead this was pictured at a picnic spot. Among the very many track used, some notable ones were "Tadap Tadap", "Dost Dost Naa Raha", "Yeh Duniya Yeh Mehfil" and "Sheesha Ho Ya Dil Ho". If you're a fan of Salman Khan, you definitely don't want to miss out on seeing his emotional side.
Kabhi Khushi Kabhie Gham 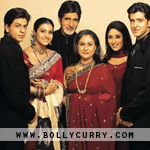 More fondly known as K3G, this film needs no introduction. Every scene is this movie is captured within the mind of it's audience ever since the first time they watch it. Not a very large medley, but definitely a notable one. This particular one happens during the Karwachauth festival, as the ladies await the appearance of the moon. It happens as such that Pooja (Kareena Kapoor) dares Rohan (Hrithik Roshan) to say the truth in front of everyone. In order to win the dare, and not directly reveal the truth, Rohan begins the medley. He starts with "Wah Wah Ram Ji" and then moves the mike to Pooja, who introduces the mega hit track "Bole Chudiyaan". The medley may not have left a huge mark, but the main track "Bole Chudiyaan" surely made the audience drool for years after the movie released, and is still used during various occasions.
Maine Pyar Kiya 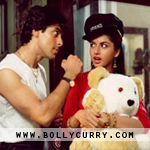 Among those classical love stories, and one of, if not the most praised film of Salman Khan. This one was not a selection of songs chosen from previous movies, but rather a conversation between Prem and Suman, in which they were conveying their feelings for each other. Once again, it's a wedding occasion, and the medley gets kicked off by Prem, who sings it directing at Suman; "Jaa Jaa Mujhe Na Ab Tu Yaad Aa". Suman then does her part with "Tumhari Nazar Kyun Khafa Hogayi", and their unstoppable heart-to-heart dialogue went on. The expressions and the way each song was used, is a pleasure to watch.
Hum Saath-Saath Hain 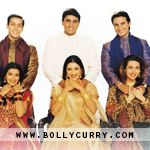 I'm sure that anyone who is an ardent bollywood movie watcher, will definitely know about this super hit flick of the 90's. During the wedding reception of Vivek and Sadhna, Vinod (Saif Ali Khan) and Sapna (Karisma Kapur) present a fun-filled parody cum medley on all the family members. Tracks like "Didi Tera Devar Deewana", "Papa Kehte Hain Bada Naam Karega" among others were used in a personalized version to mimic every character. This medley is still considered to be one of the best medleys in bollywood; pure entertainment with a blend of perfect song syncing! Hence if you haven't watched this one yet, you're really missing out on a good piece of amusement!
Indeed such additional concepts and creativity in the movies of the 90's is what made them such classical blockbusters that they are today; something which the current movies definitely lack. We at BollyCurry  only wish to see some blast from the past come back and make add some sparkle which makes Bollywood a unique platform. Before surfing away, be sure to leave your comments on what you feel about medleys and their impact in movies!
Writer: Sonia R.
Editor: Hershi J.
Graphics: Aanchal V.

Kangana Ranaut Vs Anurag Kashyap: Actress ‘Steps Back’ after ...
32 minutes ago