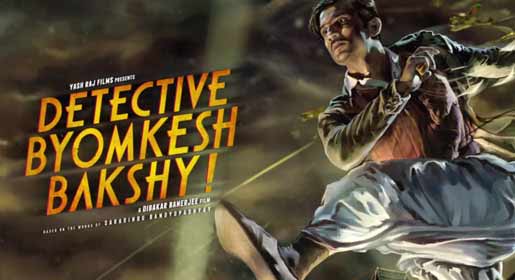 Gupt, Talaash, Kahaani, Ajnabee... the list is endless, and another name that adds to the list is Detective Byomkesh Bakshy!. However, DBB is not similar to any of those Bollywood murder mysteries you have watched till date. Set in old Calcutta, the film will take you on a journey in to the colonial city of the 1940s with its old world charm. Not just that, it will surely keep you on the edge of your seat.

As we all know, Byomkesh Bakshy, played by Sushant Singh Rajput, is a famous Bengali detective of Calcutta. A guy named, Ajit Bandyopadhyay (Anand Tiwari) seeks help from Byomkesh to find his father, Bhuwan Babu. During his search he gets to know that Bhuwan is not missing, but is dead and he has been murdered. With that murder mystery, more and more stories starts unfolding leading him to an evil genius who is out to destroy the world.

Sushant Singh Rajput, titled as a rising star of Bollywood after his debut film 'Kai Po Che!', will again win the hearts of not just audience but critics as well. Talking about other cast of the film, be it Anand as Ajit, Swastika Mukherjee as Anguri, Neeraj Kabi as Dr. Anukul Guha, Divya Menon as Satyawati or Meiyang Chang as Kanai Dao, are just perfect in their respective roles.

Well, talking about the loop holes, couldn't spot any. Though there is one negative point about the film, the ending is too stretched. It will be like you already understood how things were planned and who is who, so why the villain has to repeat it all over again.

Background score was going well with the scenes and you might be so engrossed in the film that you may miss noticing the songs. So, in a way it is a good thing that songs have jelled so well with the storyline.

On the whole, Detective Byomkesh Bakshy is a great film, but its stretched and little confusing second half stops me from calling it a perfect film. If you are a fan of typical Bollywood films that are full of masala, action, drama and romance, then DBB is not the film for you.  However, the film is interesting and thrilling enough to keep you glued to screen throughout. See the film and do post comments to let us know if you agree with the review.