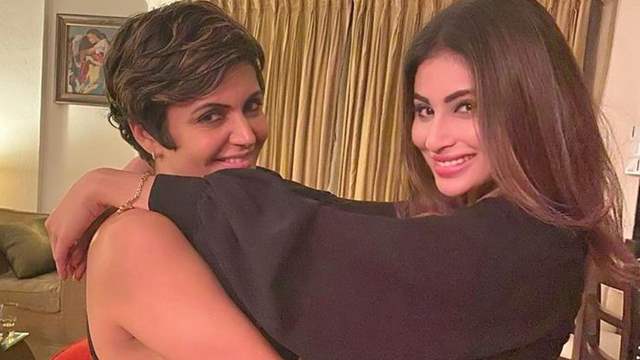 All hell broke loose on actress Mandir Bedi after her husband and filmmaker Raj Kaushal passed away after suffering a sudden heart attack. Raj breathed his last on June 30 at the age of 49.

On Tuesday, actress Mouni Roy took to Instagram to post some happy pictures with her dear friend Mandira, who is mourning the loss of her husband. Sharing the pictures, Mouni wrote: "MY BABY STRONGEST @mandirabedi."

The two girl pals twin in black and flash their best smiles in the first picture, whereas they turn goofy and pose up in the second picture. Reacting to the pictures, actors Aashka Goradia, Shamita Shetty, Asha Negi, Alisha Singh, Asha Negi among others have showered love in the comments section.

Raj Kaushal’s untimely demise came as a big shock to one and all as he was recently spotted having a get together party with his close friends including the likes of Ashish Chaudhary, Zaheer Khan, Sagarika Ghatge, Neha Dhupia, Angad Bedi, and his wife Mandira Bedi. Raj Kaushal had directed films like 'Pyaar Mein Kabhi Kabhi' and 'Shaadi Ka Laddoo'.