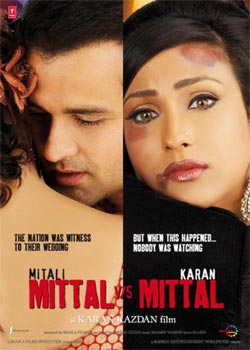 Mittal v/s Mittal starts with the love track between Karan Mittal (Rohit Roy) and Mitali Mittal (Rituparna Sengupta). Karan is the son of a millionaire and is a business man whereas Mitali is just getting into modeling.


They both coincide at a party where at the first meet itself Karan offers Mitali a marriage proposal. But Mitali as a practical woman doesn't accept it at the first go. But as parents start liking him, especially her mother she keeps on pressurizing her to get married to Karan.


And finally in some unexpected situations they both get married. And after the marriage Mitali faces the two faceted personality of Karan. Where in the before marriage sweet, lovable Karan forces Mitali for sexual intercourse every night. And when things turn unbearable to her she retaliates by terming it as rape and decides to fight a sexual harassment case in court.


And during the court proceedings many new characters are introduced two prominent of them are Suchitra Krishnamurti (Karuna) who fights for Mitali and Gulshan Grover (Harish Salunke) who fights for Karan. Both have powerful arguments and witness in court and the verdict does fall on sides of Mitali but the reason for such verdict is the twist in the tail.


The issue which is portrayed that is, marital harassment quite relevant and untouched by many. And the laws which they have spoken could be very knowledgeable to people especially women are ignorant about their rights.
Rohit Roy's acting lifts the movie at regular intervals. He's amazing as always.


The movie isn't well executed. The movie isn't directed as strongly as the issue is concerned. It loses the potential to hold audience attention. The movie just movies from present to future that is, back and forth in a much unlinked manner. The dialogues also aren't that catchy and heart shackling.
The cast of the movie also couldn't help much in uplifting the movie as a whole.


A person who is interested in watching topical movies could give it a try but withholding least expectations from the same.

Rohit Roy & Manasi Joshi Roy are back with their Second Short Film; ...

Rohit Bose Roy Reveals that Wife Manasi was the first girl he spoke to ...

Manasi Joshi Roy: I Believe That A Good Story Can Be Told From ...

Sara Ali Khan writes an adorable poem as she shares photos ...
26 minutes ago

Ishaan Khatter on working with Katrina Kaif in Phone Bhoot: ...
56 minutes ago