Only yesterday, Beyhadh actress Aneri Vajani created a stir on social media, when she posted a picture of herself, dressed in lingerie.

Even though the picture was to shut down haters, it had quite the opposite effect on social media, with the actress being shamed further.

Post this, the actor's Nisha Aur Uske Cousins co-star and close friend Mishkat Varma stood up in support of Aneri and lashed out in the comments.

Here's what Mishkat had to say. 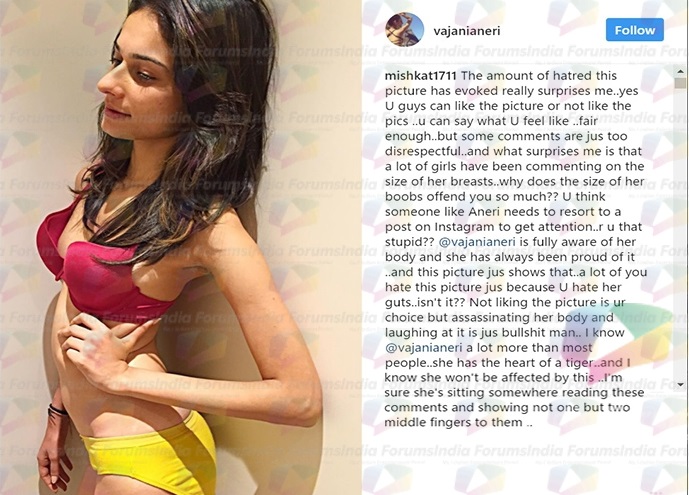 xxMATSxx 3 years ago Hes sweet and i love to see friend support.

personally if she is confidant to show that picture good for her.

from a person viewing the picture there are 2 things i do not like.. i could care less how big her boobs are.. im more offended by her choice of bra.. i think she needs to be aware of the correct fit.

second, as a viewer of the picture i feel she is mal nourished. i hope she isnt.. and its just a fast metabolism.. but if she is malnourished.. i would strongly hope she realizes the effect such pictures can have on young girls who follow her and believe her image is an image of a healthy girl because it isnt.

BeyondHorizon 3 years ago It was really sweet of Mishkat to stand up for Aneri. I wonder what's people problem really is. If one is fat, they are shamed and if you are thin also, the same rule applies. If u have a perfect body then be happy about it but don't make life miserable for others. Well its better to not have a beautiful body than have one with an ugly mind. If you don't have nothing nice to say the least you can do is ignore something. Anyways if it is not harming anyone then why be bothered about it and waste so much energy in hurting another person?

Bugheaded_NiBir 3 years ago that was so superb of mishkat to support her.above all other things a gurl need the most is respect.its her decision to post her pictute or anything else.hats iff to her and Mishkat Varma.way to go Aneri vajani and Mishkat varma.#MishriFeels

lucky17 3 years ago that is so beautiful. Way to go Mishkat. I do not see such support from people in this industry. Just on another news, the way Barun acted out and not ask for vote for Sanaya and Mohit was an example of how people behave with co-actors after they have moved on.

Alikhan2158 3 years ago I love the way Mishkat Varma came out in support of Aneri Vajani like this, like a true friend. I would have done the same. Even I show my middle finger to my haters all the time on social media. I totally agree with what he's said. Love Aneri as Saanjh in Beyhadh and Mishkat as Babbal in Ichhapyaari Naagin. Will miss the show and wish Mishkat all the best for his future endeavours

sammy17 3 years ago Aneri Vajani and Mishkat Verma are friendship goals. This society is full of double standards, where men are seen posting shirtless pics all the time on social media yet are never body shamed or given hate, but it's the opposite treatment if a woman does the same. People are disgusting. Especially these women who command respect from men yet show zero respect for each other and put another woman down.

exclusive
Exclusive "In terms of hard work and perseverance, I don't think ...
a minute ago