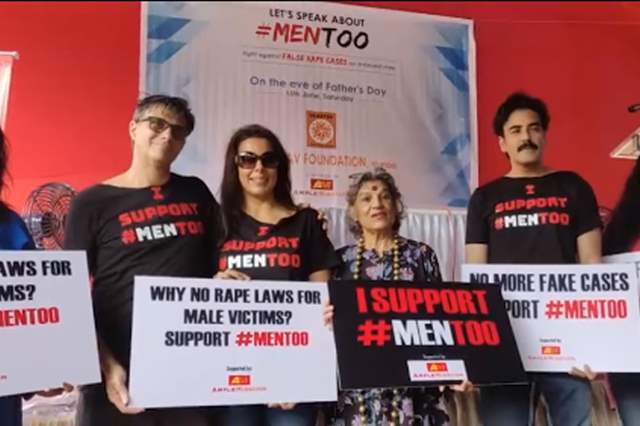 We have been giving you constant updates about the occurrences and happenings in the Karan Oberoi saga where the actor, after a long wait and repeated requests were finally granted bail in the occurrence where a woman (tantrik-healer) had accused him of rape and extortion.

This was a part of the #MeToo movement where the same has become a rage over the past couple of years and has been responsible for exposing several people in wake of sexual abuse. But it has also been witnessed that several men have been wrongly accused of rape and other such charges by women and the law have been misused.

In wake of the same, a large amount of crowd which included a few actors, activists, and people from other fields gathered at the Azad Maidan in Mumbai for a peaceful protest in order to create awareness about the misuse.

Karan also joined the dharna and in a quote to Bombay Times, he said, "After being wrongly accused, I realized that I'm not the only one. There are so many men out there who are falsely accused. After being in prison for all those days, I can say that no one should go through such an ordeal ever. When I was in jail, the ones who suffered the most were my mother and sister. So, when you are fighting for men's rights, you are also addressing the whole family that has been affected. I'm here today to support #MenToo because I believe that justice shouldn't be determined on the basis of one's gender. Every man is vulnerable if the law is misused. We are fighting for gender-neutral laws here. When I was in jail, there were so many people fighting for me outside. However, there are many voiceless people, who do not have a support system, the means or money to help them. How can you just let them suffer for no fault of theirs? So, this fight is not just mine, and it doesn't end with me getting out of jail."

The event, organised by a foundation, saw several known names lend their voices to the #MenToo movement, like equal rights activist Barkha Trehan, activist Amit Deshpande, theatre personality Dolly Thakore, Karan's sister Gurbani, his friend Sherrin Varghese (member of Karan's music band, A Band Of Boys) and Maneck Contractor, among others. Said Sherrin, "I support my bandmate Karan Oberoi; it's not about men or women, male or female, it's about equality for all genders."