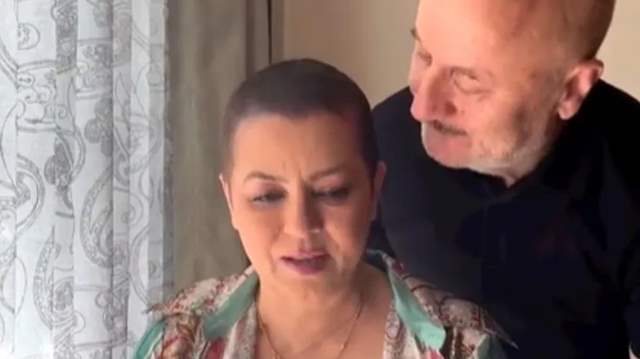 Mahima Chaudhry was one a break-out name back in the day, where she presented multiple hit films and blazed a path directly into the hearts of the public. Anupam Kher released a video of the actress on his Instagram account today, in which she detailed her entire story of discovering she had breast cancer, battling it, and emerging as a warrior. Anupam pays respect to Mahima's bravery in this moving video, referring to her as a "hero."

Mahima Chaudhry, appearing as beautiful as ever in the video uploaded by Anupam Kher is seen sitting and talking up about her overall experience from the moment Anupam called her for a role in his film until the time she healed.

Sharing this video, Anupam wrote, “Story of @mahimachaudhry1 ‘s courage and Cancer: I called #MahimaChaudhry a month back from the US to play a very important role in my 525th film #TheSignature. Our conversation turned to her discovering that she has #BreastCancer. What followed is in this candid conversation between us. Her attitude will give hope to so many women all over the world. She wanted me to be part of her disclosing about it. She calls me an eternal optimist but dearest Mahima! “You are my HERO!” Friends! Send her your love, warmth, wishes, prayers and blessings. She is BACK on sets where she belongs. She is ready to fly. All those producers/directors out there! Here is your opportunity to tap on her brilliance! Jai ho to her!! #Cancer #Courage #Hope #Prayers.”

Meanwhile, on the professional front, Anupam Kher will next be seen in Rajshri Productions' Uunchai. Parineeti Chopra, Amitabh Bachchan, Boman Irani, Sarika, Anupam Kher, and Neena Gupta, among others, will play significant roles in the flick.

+ 10
3 months ago May god bless her with strength, wishing her succesful recovery. She is a hero indeed.

+ 2
3 months ago may god bless her with immense mental,emotional and physical strength

+ 12
3 months ago I wish her a successful chemotherapy/ recovery

+ 14
3 months ago It’s unimaginable how fickle life is. Sending her good wishes and positive vibes!