Sameer Soni got his second chance in Bigg Boss 4 and expected to stay till the end, but luck favored the others, and that is what Sameer feels..

Well, Sameer who happens to be the last elimination from the Bigg Boss house in an exclusive conversation with TellyBuzz wherein he talks about his second innings in the house.. 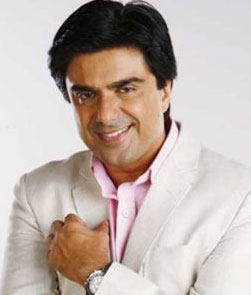 Have you seen any difference in the behavior of the inmates after your reentry?
I know there are no personal differences at all in the house and as a person the inmates like me. But in a show it lessens the chances of winning if a contender returns. So in that way they must have felt, oh my God he is back again (laughs). But then, they might be relieved that they are not eliminated.

How do you feel being eliminated just before the grand finale?
It is really disappointing and I am heartbroken and it seemed like I needed a shoulder to cry on (laughs). I wanted to be there till the end.

Who do you think has the greatest prospects of winning the show?
Anyone who gets the highest number of votes has it. Actually everybody has the chance of winning because there are people who like all members of the house. Dolly Bindra is very popular for her foul remarks and at times I get tired of it. The channel TRPs shot up with her entry and that's why she was brought back. Khali is popular among the children and  is a great entertainer. Ashmit is popular among girls and Shweta is also a great contender for them.

Do you think that Shweta Tiwari has the chance to win the show?
On a personal note I would like Shweta to win the show because she was there from the beginning and she is a good friend of mine.

Shweta was really upset when you got eliminated. What would you like you tell her?
Hang in there and win the show and share the winning prize with me (laughs).

Who do you think has the least chances of winning the show?
I cannot predict even that because all are in a game show which is  very unpredictable. But I feel that Dolly had got time to prepare herself for the show because she got in several days after the show began, during which she saw the people in the house and knew the proceedings in the house. Even after her exit she got time to revamp herself to make the reentry.

As a human being, how would you like to rate the people in the house?
I wouldn't want to rate anybody because people inside the house are really good when they come to their normal life. Inside the house you are under constant surveillance and pressure which make you do stuffs which you would not do in real. Bigg Boss is the mother of all reality shows and each day you are put into more challenging situations that test you in a more crucial way. So rating them is something which is not fair on my part. I am extremely happy with myself that I have been consistent from day one till the end, wherein I had a choice to do what I think was right, and do what will take me ahead in the show. And I chose to do what I felt was right, but then I realized it will not take you ahead for a long time (laughs).

How has been the response from the people?
I am getting a startling response from the people who are demanding to get me back again in the show, which I know the channel has no intention of doing and neither do I (laughs). I am really happy with the response I got from people and I like the fact that people love me and would have been more happy if I had got the 1 crore (laughs).

What are your plans now that you are eliminated?
I have not planned anything as of now. I would love to host a reality show because I cannot sing and dance nor can I eat snakes and stuffs (laughs). So the options that lie in front of me are limited. But definitely I would like to come on TV again.

100prabh 8 years ago Sam hoped u were in the finals but oh well!!

bindu_vasudev 9 years ago sam is bold and dumdar gharwala so he should atleast get the car.sam you are the best

sajan_mohit 9 years ago Sam u are the winner .
You never used any foul language, was genuine & polite. I really felt bad at your exit as i liked you in Big Boss. Wish u all the best for your future.

akash08 9 years ago very well said Sameer. Hats off to you for being so graceful in defeat and being so well behaved and not pass dirty comments about fellow housemates. Hope you spread this attitute of you among your fans as well specially those rigging theory believers!!

ramita_nayal 9 years ago I am very disappointed after sameer elimination:(...now i am 100% sure that this is all scripted....we love you sameer, and for us u are the bigg boss winner:)....keep on rocking

sidmafan 9 years ago actually u got more votes than dolly, each and every one know that . but it is the game of TRP. none of comments are for dolly. i guess only her family members have voted her and no one else. so for us u and sweta are winners.

TIA.Tia 9 years ago Don't blame the people BBis rigged they predicted your elimination from BB even before you got nominated.. So even if you have had million votes then too you would have been out of BB.. B'cos there is no reality in reality shows Baby

Akshay Kumar Breaks his 18 Year's Rule; Shocks Everyone
56 minutes ago