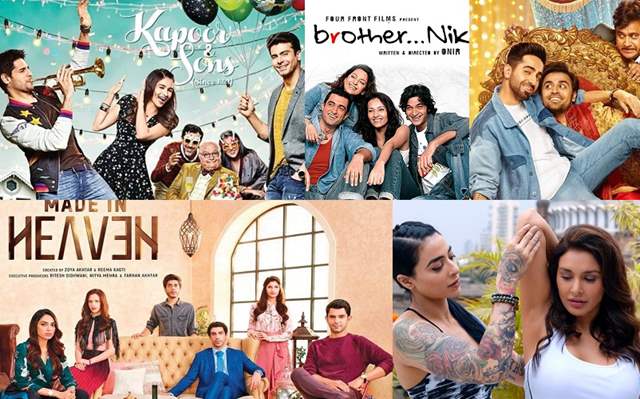 Celebrations for Pride Month continue in 2020 despite a global lockdown. While the spirit of pride this year will not be visible through flamboyant parades, here are 5 titles to watch on Amazon Prime Video that remind viewers that Love is Love.

Made in Heaven: Made in Heaven is the story of two wedding planners in Delhi, where tradition jostles with modern aspirations against the backdrop of big fat Indian weddings revealing many secrets and lies.

Four More Shots Please!: While Umang (Bani J) accepts her sexuality and receives support from her friends, her partner Samara (Lisa Ray) is hesitant about coming out of the closet. Four female friends from different walks of life deal with romance, work-life conflicts, ambitions and anxieties in modern-day India.

Shubh Mangal Zyada Saavdhan: The film revolves around Karthik (Ayushmann) and Aman (Jitendra). The road to achieving a happy ending is a little too rough for two guys Kartik and Aman. While Aman's family tries hard to battle his love for Kartik, Kartik isn't prepared to step back until he marries Aman.

Kapoor and Sons: Kapoor and Sons is a story revolving around a dysfunctional family of 2 brothers who visit their family and discover that their parents marriage is on the verge of collapse, the family is undergoing a financial crunch and much more as the drama unfolds.

My Brother…. Nikhil: The film revolves around the story of young boy Nikhil Kapoor (Sanjay Suri) and his partner Nigel (Purab Kohli) and how both of them fight together in uncertain circumstances.

This film is set in Goa between 1986 and 1994. Nikhil is the state all round swimming champion. His father Navin Kapoor (Victor Banerjee) has raised his son to be a sports man, a dream that he never achieved for himself. His elder sister Anamika (Juhi Chawla) teaches in a primary school and loves him dearly. His mother Anita Rosario Kapoor (Lillete Dubey) adores him.

Erica Fernandes shares a glimpse of music video with Harshad ...
36 minutes ago