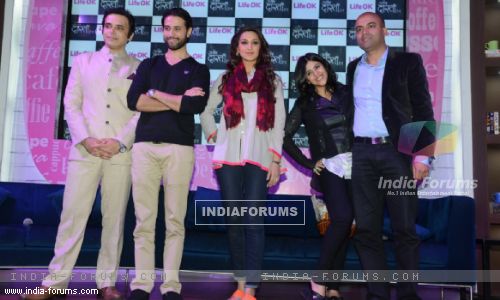 Life OK as a channel is known for bringing in new and fresh content that can cater to various strata of audience. Life OK is back again with its new finite venture Ajeeb Dastaan Hai Ye. The channel along with the producer Ekta Kapoor launched the show on a grand scale yesterday as they revealed the first promos in depth.
Coming to the storyline, Ekta Kapoor is known for bringing in some content with a sense of maturity in it. The latest being Ajeeb Dastaan Hai Ye.
Emphasizing on how the show will shape up - The story is about Shobha (Sonali Bendre) who is very content in her own little world until she was left devastated after her politician husband Samarth (Harsh Chhaya) was put behind bars for some not acceptable doings. Overnight, she was left holding the reigns of her family as the aftermath of the wrong activities done by her husband. While Shobha trying to absorb the fact and settle down in life, she ends up meeting Vikram (Apurva Agnihotri) where she works as an assistant to Vikram in his coffee shop. Apart from the hardships Shobha is facing in her personal life, she also has to face her galling boss at work.
The show also touches on the tender issue of infidelity. It showcases the tryst of a woman who is left by her husband and is set free to achieve her goals and in order to find happiness for her family and loved ones.
Well, this unique story with the USP of finite series is something that will touch the audience like never before.
Surely, Ekta Kapoor and the channel have some really amazing ventures in their kitty.
Upasana Patel

+ 6
6 years ago Sounds like "The Good Wife". Alicia was a former lawyer who's politician husband cheated on her with an escort, and he was put in jail for corruption. Alicia goes back to work and works for an ex university friend's firm. He was always in love with her since collage. She starts to develop feelings for him as well. It's about how Alicia becomes the bread winner and the sole parent to her kids after her marriage falls apart.
So this story sounds a little similar, but not the same. I think this will be great. I used to be a fan of Sonali when she was in BW. I might check it out.

6 years ago The promos definately look interesting and promising but since it's an Ekta Kapoor show, I am skeptical. I guess we will have to wait and watch!

angelicbabe 6 years ago The promos and basic plot of the show look attractive and definitely draw attention.

I just hope that this channel maintains the promise of finite episodes and does not butcher another show. The treatment metted out to the previous show,at the same slot, isn't exactly commendable.

+ 2
6 years ago Does Life OK know the meaning of finite??

+ 4
6 years ago So this show is loosely based on the Good Wife lol. Bt in any case I have to say the promo's are simply fantastic very elegant and it just seems to be classy. Sonali looks lovely and Apu is too good. Looking forward to it

+ 3
6 years ago Beautiful Concept Looking fwd to seeing Apurva back ! The promos are fantastic !! Apurva & Sonali look great in one frame !! Lovely setting Coffee & Love where do they stand !! Layered characters & best wishes to the team!! A freshness of beans brewed to make indeed an Ajeeb Dastan!!

9 years ago I'm so sorry to hear that. May his soul rest in peace, and may those close to him have the strength to cope with this loss.