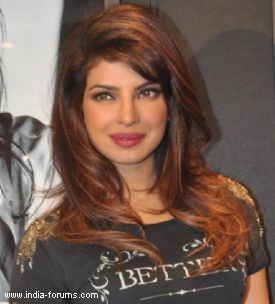 If art provocates crimes against women, historic sites like Ajanta-Ellora and Vatsayana's "Kamasutra" must be banned, says Indian actress Priyanka Chopra, who believes cinema is an "art" too and it should not be blamed for the rising crimes against women in the nation.

"I feel people are becoming less tolerant and more judgemental. Hindi films are meant for entertainment...If people think songs and films are causing an increase in rapes, why not first shut Ajanta-Ellora? We are a land of the 'Kamasutra'...let's ban books," said Priyanka.

"Sculpting is an art, poetry is an art, filmmaking is an art... We have the freedom of speech in our country, and we also have a system of film certification. Follow the law! If a film has been given the 'A' certificate, why let children go for it? There's lawlessness here. I feel a filmmaker should just make what he wants to," Priyanka said at the Agenda Aaj Tak conclave here Thursday.

The portrayal of women in Hindi cinema and the viability of item songs is always questioned. She received an applause for speaking her mind out on the issue brought up everytime that a rape case comes up.

But Priyanka, who backs girl child empwerment via diffferent campaigns, says violation against women will only reduce when "laws will be implemented".

"We have strict laws now, but there's no implementation. There's fearlessness," said the actress, who has grooved to item songs like "Babli badmaash" and "Ram chahe leela".