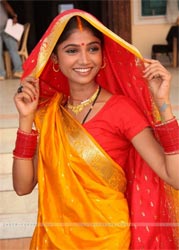 According to our source, "Laali finally succeeds in trapping Mukul by recording all his confessions and later threatens to reveal his truth to one and all. However, Mukul is too strong for Laali and he is about to kill her, when Ratna comes in with a gun in her hand. This leads to more high voltage drama as Sumitra (Rupa Ganguly) enters the scenario which happens in the terrace. When she gets to know of Mukul's evil mind, she picks up the gun and is about to fire at Mukul. She in fact manages to shoot on Mukul's shoulder, but when she is shooting him again, Mukul pulls Ratna towards him, and the bullet hits her. If this is not enough, Mukul and Ratna fall off the terrace and breathe their last".

The death of Ratna will come as a shocker to the entire family. "But Laali makes the big sacrifice yet again, and will take the blame of shooting at Ratna and Mukul, thus saving Sumitra. With Laali confessing to the police, she will be arrested. Shekar (Abhishek Rawat) who is not aware of the real truth will be royally pissed off with Laali, as she is responsible for his sister's death. The track ahead will focus on the major loss that Loha Singh's family have encountered, and the seperation of Laali and Shekar", adds our source.

When contacted both Shakktii Aroraa and Ratan Rajput, but they refused to comment.

10 years ago interesting information. laali always takes the blame for everything. why does she put herself into these situations? her sweetness and kindness goes a little to far at times. she needs to think of herself and the baby. her husband seems to be lost in the twilight zone since his sis came on. disgusting..what happened to supporting your wife no matter what....

10 years ago Ugh!! Now everyone is going to hate Laali! Why is this happenning?

10 years ago wat a stupid storyline its just sacrifices,sacrifices and more sacrifices

10 years ago isn't this the story in all dramas? its getting old!

10 years ago now this show is getting annoying. So sick of seeing lali taking crap from others. please show some mercy for this poor girl. pathetic simply pathetic.

+ 5
10 years ago how can they do that?? are they mad, urgghh i hardly watch it but still

10 years ago Is there any indian serial left that has a logical storyline anymore?