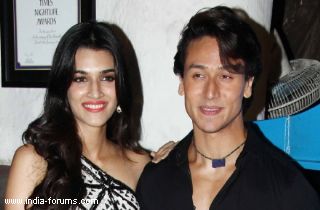 Actress Kriti Sanon, who debuted in Bollywood with Tiger Shroff-starrer "Heropanti", says she wants to strike a balance between South and Bollywood industry.

"I am open to do films down South and I want to strike a balance between South and Bollywood industry. I have done films in Telugu and (I feel that) Southern industry has evolved over the years. So, I am okay doing films in South," she told IANS.

The actress, who is also blessed with hour-glass figure, says that Southern Industry is not only about "healthy actresses".

"Southern industry is not really about healthy actresses and I was never asked to gain weight to be part of any South film," she added.

Kriti is currently enjoying the success of "Heropanti" and says she is planning to gift herself a house in Mumbai.

"I am from Delhi and all this while I was living in a rented apartment. Now I am hunting for a house and want to gift a house to myself in Mumbai," she said.

Kriti Sanon's sister Nupur Sanon all set for her Big Debut; To get ...