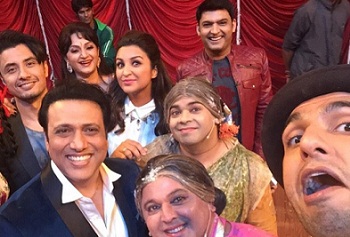 Colors' popular comedy show Comedy Nights with Kapil has garnered a lot of attention for its comedy essence and brilliant star cast.

The show has many celebs coming from all over the industry to enjoy themselves with the team of the show. Many Bollywood actors come in the show to promote their upcoming movies.

In this week the the viewers will see the actors from the film Kill Dill to promote their movie.

Yes, the star cast consisting of Govinda, Parineeti Chopra, Ranveer Singh and Ali Zafar of Kill Dil made their appearance on the show and had a fun time with the cast of the show.

Well, with the team of Kill Dil, it will be a sheer entertainment for the viewers of Comedy Nights with Kapil!

curry-sistah 9 years ago nice... can anyone pls translate the title

RagMasta 9 years ago Hmmm Interesting..not a big fan of Vishal's movies..but lets see what he brings out of Imran!