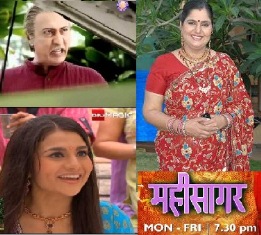 The producers of Big Magic's Mahisagar have a special surprise in store for the audience this weekend. Anang Desai and Vandana Pathak of Khichdi fame have been roped in for a special Mahaepisode where they'll be seen fighting the forces of corruption. This special episode will air at 7:30pm this Saturday, 7th December 2013.

Says Anang Desai, "In this episode, Vandana and I are school friends of Ansuya. My character lives in the US and has recently come back to India for a visit. He's shocked to find that his ancestral property has been illegally captured during his absence."

According to the track, Mahi will try to help Anang and will do some detective work of her own. Through her investigation, she finds out that the culprit is someone who is very close to Ansuya. When Ansuya doesn't believe her, Mahi decides to get help from Ansuya's childhood friend, who is played by Vandan Pathak. Together with Vandana, Mahi will set an elaborate trap for the culprits.

"It was such an honor working with television legends like Anang and Vandana. Having watched them growing up, I was quite scared when I first met them. But they quickly put me at ease and even tutored me through some of the scenes" confesses Dharti Bhatt.  "As a huge Khichdi fan, this episode is very special to me and I'm sure viewers are going to love seeing this iconic duo back on the small screen."